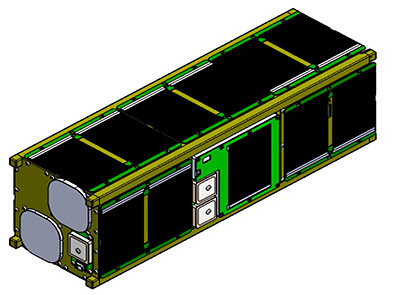 NSLSAT1 is a 3U CubeSat mission by NearSpace Launch to correlate solar activity to electron density in the Near-Earth (LEO) plasma field.

The spacecraft will carry a Energetic Particle Detector and a Langmuir Probe.

Transmission will begin 30 minutes after deployment and will remain active for 2 years. Atmospheric friction will slow the satellite and reduce the altitude of the orbit until deorbiting occurs, approximately 5 years after launch.

The satellite was to be launched as a payload aboard a NASA CRS (Commercial Resupply Mission) inside a NanoRacks CubeSat Deployer (NRCSD). Current launch vehicle is the Cygnus CRS-11 mission, scheduled to launch from Wallops Island, VA in 2019 on an Antares-230 rocket. About 90 days after this launch, the NG-10 will unberth from the ISS, boost to a higher orbit, and deploy the satellite. The satellite will be inserted into a near-circular orbit at 500 km at an inclination of 51.6 degrees from the equator.

Later the satellite was rebooked to the maiden orbital launch of the Astra Rocket-3.1. It is to be orbited in September 2019 from Kodiak. The planned orbit is into near-circular at 550 km at an inclination of 90 degrees from the equator.