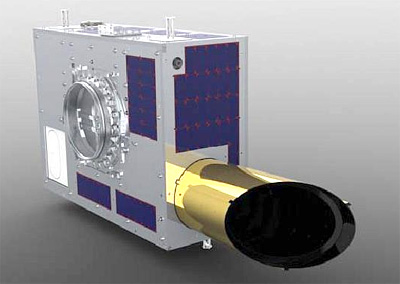 Canada is building the world's first space telescope designed to detect and track asteroids as well as satellites. Called NEOSSat (Near Earth Object Surveillance Satellite), this spacecraft will provide a significant improvement in surveillance of asteroids that pose a collision hazard with Earth and innovative technologies for tracking satellites in orbit high above our planet.

Weighing in at a mere 65 kilograms, this dual-use $12 million mission builds upon Canada's expertise in compact microsatellite design. NEOSSat will be the size of a large suitcase, and is cost-effective because of its small size and ability to piggyback on the launch of other spacecraft. The mission is funded by Defence Research Development Canada (DRDC) and the Canadian Space Agency (CSA). Together CSA and DRDC formed a Joint Project Office to manage the NEOSSat design, construction and launch phases. The two projects that will use NEOSSat are HEOSS (High Earth Orbit Space Surveillance) and the NESS (Near Earth Space Surveillance) asteroid search program.

NEOSSat is the first follow up mission to the groundbreaking MOST (Microvariability and Oscillation of STars) spacecraft, a 60 kilogram satellite designed to measure the age of stars in our galaxy. NEOSSat also marks the first project using Canada's Multi-Mission Microsatellite Bus. CSA's Space Technology branch launched the Multi-Mission Bus project to capitalize on technology developed for the MOST project by making it adaptable to future satellite missions.

The HEOSS project will demonstrate how a microsatellite could contribute to the Space Surveillance Network (SSN), a network of ground based telescopes and radars located around the world. Until the 1980s, Canada contributed to the SSN with two ground-based telescopes in eastern and western Canada. The fact that HEOSS will be a space-based capability on a microsatellite represents an exciting enhancement to the contribution and offers significant advantages to the SSN. Ground-based sensors' tracking opportunities are constrained by their geographic location and the day-night cycle. In Sun-synchronous orbit around our planet, NEOSSat will offer continuous tracking opportunities and the ability to track satellites in a wide variety of orbit locations.

Although NEOSSat's 15 centimeter telescope is smaller than most amateur astronomers', its location approximately 700 kilometers above Earth's atmosphere will give it a huge advantage in searching the blackness of space for faint signs of moving asteroids. Twisting and turning hundreds of times each day, orbiting from pole to pole every 50 minutes, and generating power from the Sun, NEOSSat will send dozens of images to the ground each time it passes over Canada. Due to the ultra-low sky background provided by the vacuum of space, NEOSSat will be able to detect asteroids delivering as few as 50 photons of light in a 100 second exposure.

NEOSSat was originally expected to be launched into space in 2010, but the launch has slipped into 2013.