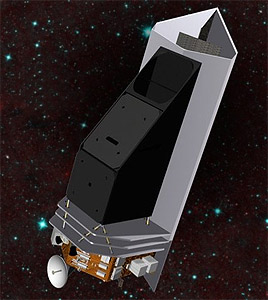 NEO Surveyor (Near Earth Object Surveyor) is a planned space-based telescope to search for near-Earth asteroids under development by NASA. The Jet Propulsion Laboratory will lead development of the mission under NASAs planetary defense program.

After launch, NEO Surveyor will carry out a five-year baseline survey to find at least two-thirds of the near-Earth objects larger than 140 meters (460 feet). These are the objects large enough to cause major regional damage in the event of an Earth impact. By using two heat-sensitive infrared imaging channels, NEO Surveyor can make accurate measurements of NEO sizes and gain valuable information about their composition, shapes, rotational states, and orbits. In five years of survey operation, NEO Surveyor is designed to make significant progress toward meeting the U.S. Congress's mandate to NASA to find more than 90 percent of all NEOs larger than 140 meters in diameter. The >90% number is a mission goal to be achieved in 10-12 years.

NEO Surveillance Mission is based on the NEOCam mission that was a finalist in the previous competition for Discovery-class planetary science missions.

The spacecraft is to feature a 50 centimeter telescope with a camera that operates in two infrared bands, 4-5 microns and 6-10 microns. It will be capable of detecting both bright and dark asteroids, which are the most difficult type to find. The spacecraft would have a total mass of no more than 1,300 kilograms, allowing it to launch on a vehicle like an Atlas-5(401) or Falcon-9 v1.2 (Block 5) to the Earth-sun L-1 Lagrange point. By operating at the L1 Lagrange point, the NEO Surveyor will be in a stable, cold environment. The mission's mercury-cadmium-telluride (HgCdTe) detectors are capable of operating in this environment for many years without requiring expensive cryocoolers or life-limiting cryogens. The NEO Surveyor will use Teledyne's HgCdTe Astronomical Wide Area Infrared Imager (HAWAII) detector architecture, which is in use in astronomical telescopes around the world.