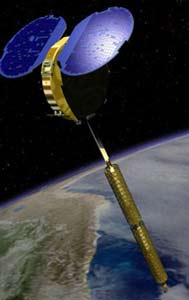 Less than three years after contract award, a prototype MUBLCOM (Multiple Path Beyond Line of Sight Communication) satellite is scheduled for launch from Vandenberg Air Force Base, Calif. The Space and Terrestrial Communications Directorate (S&TCD) of the Army Communications-Electronics Command (CECOM) is the program manager for the MUBLCOM program. The satellite communications program is a Technology Reinvestment Project (TRP) sponsored and partially funded by the Defense Advanced Research Projects Agency (DARPA).

Using a Low Earth Orbit (LEO) satellite as an extremely high relay tower in the sky, the project will demonstrate mobile, beyond-line-of-sight, netted communications among military forces. Another goal is to determine the feasibility of deploying a LEO constellation with up to 64 satellites that will enable worldwide communications for both commercial and government users. On 22 May 1996, a consortium led by Orbital Sciences Corporation entered an agreement, via the TRP program, to build and launch the satellite, build hand-held voice/data terminals and a ground control station, and support government demonstrations and experiments.

The prototype system will address many Department of Defense needs for secure, mobile, netted, interference-resistant communications. Beyond the line-of-sight digital voice and data communications is supported via state-of-the-art hand-held terminals that are rapidly deployable, cost-effective, virtually terrain independent which can be used in all types of weather. MUBLCOM terminals employ multiple receivers, which select the strongest signal paths, even if the path is a reflection from a hillside. The MUBLCOM terminals also include features such as integrated Global Positioning Satellite (GPS) geolocation and a line-of-sight mode for off-loading local traffic from satellite relays.

Space based MUBLCOM relays are installed inside a Microstar satellite bus, manufactured by Orbital Sciences Corporation. The completed satellite is very small, only 41" in diameter, 6.5" high, weighting less than 100 lbs. Eight MUBLCOM satellites can be launched at the same time using the Pegasus-XL HAPS rocket.

Upon completion of the on-orbit satellite checkout, the satellite and terminals will be available for government demonstrations.

The MUBLCOM system will provide a combination of coverage, performance, functionality and affordability that is unequaled by existing or proposed communications systems.

MUBLCOM was used as a rendez-vous traget for NASA's DART mission. For this purpose, MUBLCOM carried some Laser-reflectors for the targeting system. During the rendezvous maneuver, the DART spacecraft bumped into the MUBLCOM satellite, but none of the spacecraft were damaged.