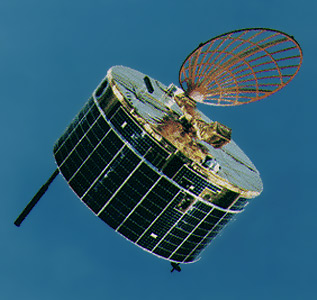 MS T5 or Sakigake ('Pioneer') was a test spacecraft similar to Suisei (Planet-A). It was put into a solar orbit and flew by Comet 1P/Halley on its sunward side at a distance of about 7 million kilometers on 11 March 1986.

The mission of MS T5 (Sakigake) aimed to demonstrate the performance of the new M-3S-2 launch vehicle, test the sequence of the first escape from the Earth gravitation for Japan on engineering basis, and observe space plasma and magnetic field in interplanetary space in the far environment of Comet 1P/Halley. Sakigake was also supposed to get references for scientists. Early measurements would be used to improve the mission of the Suisei (Planet-A) probe several months later.

It carried three instruments to measure plasma wave spectra, solar wind ions, and interplanetary magnetic fields, all of which worked normally. The spacecraft was spin-stabilized at two different rates (5 and 0.2 rpm). It was equipped with hydrazine thrusters for attitude and velocity control, star and sun sensors for attitude determination, and a mechanically despun off-set parabolic dish for long-range communication.

Sakigake made an Earth swingby on 8 January 1992. The closest approach was at 23h08m47s (JST, = UTC+9h) with a geocentric distance of 88,997 km. This was the first planet-swingby for a Japanese spacecraft. During the approach, Sakigake observed the geotail. A geotail passage occurred at 290 Re on 14 June 1993 before ISTP's multi-spacecraft investigation of that region. The second Earth swingby was on June 14, 1993 at 40 Re, and the third on 28 October 1994 at 86 Re. Almost no hydrazine remains so no further maneuvers were accomplished. Telemetry contact was lost on 15 November 1995 at a distance of 106 million km. Future mission planning had included a 23.6 km/s, 10,000 km flyby of Comet P/Honda-Mrkos-Pajdusakova on Feb 3, 1996 (approaching the nucleus along the tail) some 0.17 AU from the Sun, and a 14 million km passage of Comet P/Giacobini-Zinner on Nov 29, 1998.