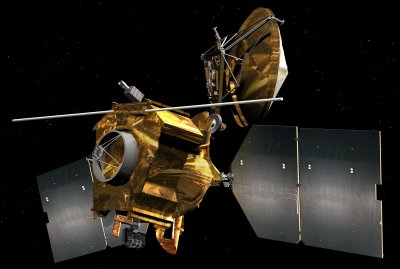 The Mars Reconnaissance Orbiter (MRO) will make high-resolution measurements of the surface from orbit. It will be equipped with a visible stereo imaging camera (HiRISE) with resolution much better than one meter and a visible/near-infrared spectrometer (CRISM) to study the surface composition. Also on board will be an infrared radiometer, an accelerometer, and a shallow subsurface sounding radar (SHARAD) to search for underground water.

The orbiter will also be used as a telecommunications link for future missions (Electra UHF radio).

MRO has a mass of approximately 2180 kg and was launched on an Atlas-5(401) expendable booster during a 21-day launch window from August 8 to 28 August 2005. It reached Mars on 11.03.2006 and will undergo four to six months of aerobraking to lower the initially highly elliptical orbit to a 250 × 320 km polar science orbit. Science observations, including detailed studies of selected target regions, will take place over one Martian year (roughly two Earth years) after which the orbiter will be used as a communications relay.