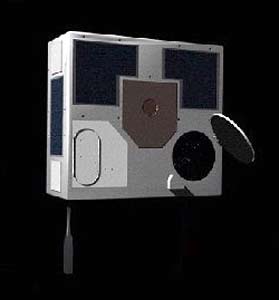 MOST (Microvariability and Oscillation of Stars) is designed to detect brightness oscillations in stars down to a level of a few parts per million - the amplitude of the Sun's five-minute oscillations seen in integrated light. Those oscillations (caused by turbulent sound waves propagating within the Sun) allow us to probe seismically the otherwise hidden solar interior.

MOST features a small optical Maksutov telescope with an aperture of 15 cm, equipped with a dual-CCD photometer designed to return unprecedented photometric precision (ΔL / L ~ 10-6) and frequency resolution (Δν~ 0.1 µHz) on stars other than the Sun. One CCD gathers science images, while the other provides images used by star-tracking software that, along with a set of four reaction wheels, maintain pointing with an error of less than 1 arc-second.

MOST was launched together with a number of other small satellites on a Rokot-KM flight in June 2003.

The MOST mission resulted in a number of discoveries. In 2004 the MOST team reported that the star Procyon does not oscillate to the extent that had been expected, although this has been disputed. In 2006 observations revealed a previously unknown class of variable stars, the "slowly pulsating B supergiants" (SPBsg). In 2011, MOST detected transits by exoplanet 55 Cancri e of its primary star, based on two weeks of nearly continuous photometric monitoring, confirming an earlier detection of this planet, and allowing investigations into the planet's composition.

Mission funding by CSA ended in September 2014, despite the satellite being fully functional. In October 2014, it was transfered to by Microsatellite Systems Canada Inc. (MSCI), who has operated the satellite since launch in 2003. In April 2019, the satellite could no longer powered up. It surpassed its design life of 1 year by the factor 15.