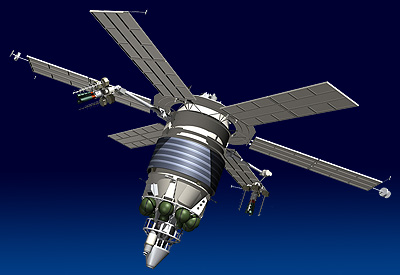 The Molniya-1 satellites carry the Alfa communications payload consisting of 5 transponders. It was used for bidirectional telephone, telegram or fax transmissions in the Orbita network or alternatively for TV broadcast. Three of transponders have a power of 40 W, and the other two of only 20 W. The first Molniya-1 satellites were equipped with two deployable parabolic antennas of 1.2 m diameter with a radiation pattern by 22°. After the transfer of the prime contractor for Molniya-1 from OKB-1 to the OKB-10, in 1965, the antenna gain was found to be two to three times lower than expected, so OKB-10 replaced each dishes antenna by four helical antennas.

The Molniya-1 series was replaced by the improved Molniya-1K series.