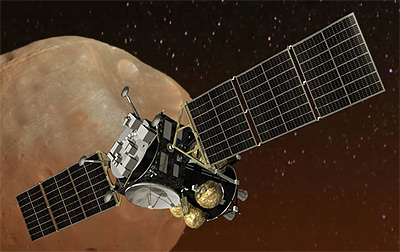 MMX (Martian Moons eXploration) is planned mission to survey Marsts moons Phobos and Deimos. The spacecraft will explore both moons and collect a sample from one of the moons to bring back to Earth.

ISAS/JAXA plan to launch the orbiter in early 2020s. In order to retrieve the samples, the spacecraft will need to complete a roundtrip to Mars, circle around the moon and land on its surface. The most complex and risky parts of this mission are the operations around the moons and the descent and landing. These heavily constrain the system design and have involved an in-depth study from the earliest stages of the mission.

The primary mission objective is to distinguish between the two leading hypotheses for the origin of Phobos and Deimos. The first of these suggests the moons are captured primitive asteroids, while the second proposes that they are the agglomerated fragments of a giant impact event on Mars.

The second objective is to characterise the conditions on and around the moons. This includes surface processes on Phobos and Deimos, the nature of the circum-Martian environment (the region where objects orbit around the planet) and the global and temporal dynamics of Marss atmosphere, such as dust, ice, clouds and water vapour.

The Science payload will consist of:

The launch of MMX is planned for September 2024 with Mars arrival in August 2025. It will enter orbit around Mars, then transfer to Phobos, and land once or twice and gather sand-like regolith particles using a simple pneumatic system. The lander mission aims to retrieve a minimum 10 g of samples. MMX will then take off from Phobos and make several flybys of the smaller moon Deimos before sending the Sample Return Capsule back to Earth in August 2028 leading to a return to Earth in July 2029.