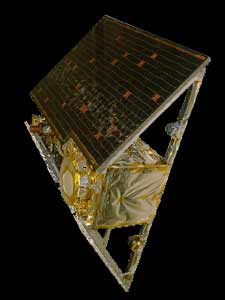 MITA (Mini-Satellite Italiano a Tecnologia Avanzata) is being developed with the prime contractorship of Carlo Gavazzi Space S.p.A. under an A.S.I. (Italian Space Agency) contract. The project's aim is to design, develop and implement a low cost platform for small Earth missions in order to support a wide range of applications. The configuration of the satellite main body is based on a cubic-shaped module,100 (kg) range, 3 axis stabilized and is designed especially for Low Earth Orbit (LEO) missions with a lifetime of 3 to 5 years.

The purpose of the programme is threefold:

MITA carries the payload NINA-2 for the study of solar and galactic cosmic rays. The detector used in this mission is identical to the one already flying on the Russian satellite Resurs-O1 4 in a 840 km sunsynchronous orbit, but makes use of the extensive computer and telemetry capabilities of MITA bus to improve the active data acquisition time. The scientific objectives of NINA are the study of cosmic nuclei from hydrogen to iron in the energy range between 10 MeV/n and 1 GeV/n during solar maximum period. The device is capable of charge identification up to iron with isotope sensitivity up to oxygen.