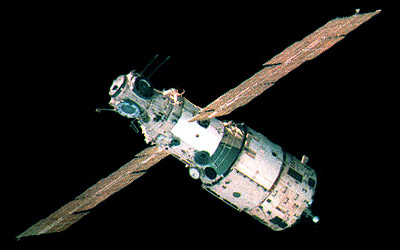 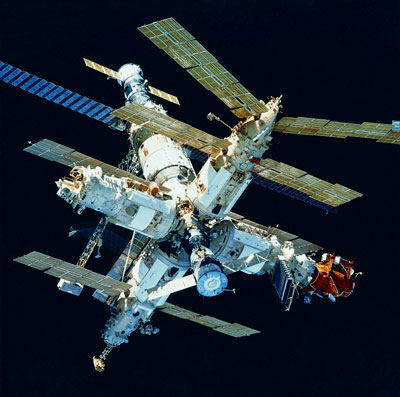 The space station Mir circles the Earth in an orbit with inclination 51.6 degrees, perigee 350 km and apogee 400 km. It consists of six main modules: the Mir core module and the scientific modules known as Kvant, Kvant-2, Kristall, Priroda, and Spektr. (The names of the scientific modules translate as Quantum, Crystal, Nature, and Spectrum, respectively.)

The core module, launched 2/19/86, has a mass of ~21 tons, a length of about 13.1 m, and a maximum diameter of 4.2 m. It consists primarily of a passage area with five docking ports, a working area housing the command station, living/eating and hygiene facilities, and a propulsion section through which a tunnel allows access to the Kvant module.

Logistical resupply of Mir is provided by the uncrewed Progress, Progress-M and Progress-M1 transporters, with a payload capacity in the order of 2.5 tons. The crew is transported to and from the station with the Soyuz-TM and later Soyuz-TMA ferries, which can accomodate three astronauts/cosmonauts per trip. Both the Soyuz-TM and Progress are expendable systems and are launched by the Soyuz launch vehicle. Later the NASA STS (Shuttle) missions also docked with Mir, and have transported crew and materials back and forth.

The results of the experiments, including samples, film, etc., are usually returned to earth by the astronaut/cosmonaut on board the Soyuz-TM or the Shuttle. A special unmannned re-entry capsule called VBK-Raduga enhances these return capacities.

The complete history of the Mir complex can be found here.