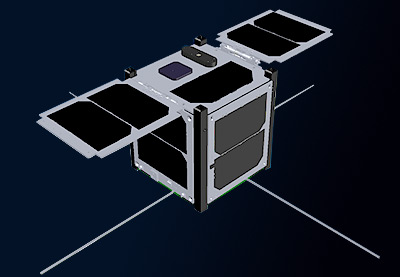 MIR-Sat 1 (Mauritian Infra-Red Satellite 1) is Mauritius' first satellite. The 1U CubeSat is being built by the Mauritius Research Council (MRC).

Mauritius intends to use its first CubeSAT platform to acquire knowledge on satellite technology and how to efficiently collect and process land and ocean data coming from space. This big data analysis will lead to better monitoring, decision-making and management of both land based and maritime activities and advancement in capacity building, research & development and innovation, which will ultimately benefit the people of the Republic of Mauritius.

Originally the satellite was to image Mauritius and the surrounding regions using longwave infrared (LWIR) thermal camera. During development, the thermal camera was replaced with a RGB camera. Regardless, the MIR-Sat name was retained.

The Japan Aerospace Exploration Agency (JAXA) and the United Nations Office for Outer Space Affairs (UNOOSA) have selected MIR-Sat 1 for the third round of the UNOOSA-JAXA KiboCUBE programme. KiboCUBE is an initiative that offers educational and research institutions from developing countries the opportunity to deploy cube satellites (CubeSats) from the Kibo module of the International Space Station.