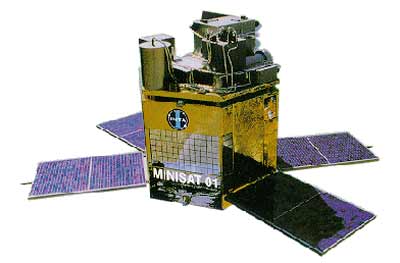 Minisat 01 was a Spanish space agency, Instituto Nacional de Tecnica Aerospacial (INTA) minisatellite to test a low-cost multipurpose bus with a payload consisting of three experiments and a technology demonstrator.

The 195 kg satellite measured 1145 × 1005 × 1170 mm, with four 45 W, 1.5 m deployable panels. The spacecraft power system was 28 V unregulated with 60 W average power requirement. Uplink and downlink was via S-band, 5 W at 1 Mbps, and data storage was 32 Mbyte. It was sunpointing 1-axis spin stabilized with an accuracy of 3 degrees. The spacecraft bus and payload roughly shared 50% each of the available mass.

The satellite was built by the spanish CASA company, and the selected payload to the MINISAT 01 was composed of three instruments and one technology demonstrator:

It was the first in a series of planned satellites based on this bus, and was designed to operate for 2 years. Allthough successful, no further satellites of the Minisat series were built.

MINISAT-01 reentered the atmosphere on 14 February 2002 after almost 5 years working successfully in orbit.

A second satellite of this series, Minisat 02, was planned to be launched in 2001.

Minisat 02 was to carry four experiments:

The Minisat 02 mission was cancelled.