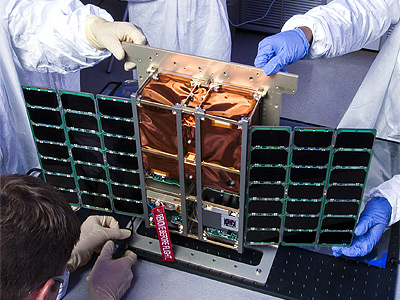 The MiniCarb or CNGB (CubeSat Next Generation Bus) is a joint 6U CubeSat mission by Lawrence Livermore National Laboratory (LLNL) and NASA's Goddard Space Flight Center to demonstrate a new CubeSat bus and a novel instrument to measure atmospheric greenhouse gases from an occultation-viewing, low-Earth-orbiting CubeSat.

LLNL designed a new, 5 kg 6U CubeSat bus known as the CNGB (CubeSat Next Generation Bus). The CubeSat Office at the National Reconnaissance Office originated the CNGB concept, funding researchers at LLNL, the Naval Postgraduate School, and the Space Dynamics Laboratory to develop a government-owned nano-satellite architecture that could support a broad range of missions. The prototype mission allowed a payload to be flown so LLNL teamed up with NASA Goddard.

NASA Goddard had developed a novel laser heterodyne radiometer to measure carbon dioxide from space. Laser heterodyne radiometers were adapted from radio receiver technology. In this variation, the concentrations of greenhouse gases are found by measuring their absorption of infrared sunlight. Each absorption signal is mixed with laser light in a fast photoreceiver within the instrument and the resulting signal is detected at an easier-to-process radio frequency. While this is similar to other absorption techniques, such as those used in the Orbiting Carbon Observatory-2, laser heterodyne radiometry offers higher spectral resolution as well as improved signal-to-noise levels due to the internal mixing of sunlight with laser light. Other advantages are that the mini-LHR is more compact and includes no moving parts. Furthermore, the instrument can measure three greenhouse gases: in addition to carbon dioxide, the instrument can simultaneously measure water vapor and methane in Earths atmospheric limb at a small fraction of the cost to build a more traditional, non-CubeSat instrument. The Mini-Carb instrument is made of commercial parts and operates passively  that is, it collects sunlight that has absorbed the targeted greenhouse gases. That light is combined with laser light tuned to the infrared wavelengths and then amplified. Through a series of other steps, the instrument can reveal the concentrations of the greenhouse gases contained in the atmosphere. The instrument has alread been proven in ground tests.

Once in orbit, Mini-Carb will observe the region between the upper troposphere to the lower stratosphere between 9.6 and 29 km above Earths surface. Measurements in this atmospheric region provide important information about stratospheric circulation and how it responds to increasing greenhouse gas concentrations. cientists believe that the projected increases in methane and carbon dioxide this century will affect several physical processes that drive climate change, she said. Methane, which is especially long-lived, results in the increased production of stratospheric water vapor and hydroxide, which directly affects ozone, the layer that protects Earth from harmful ultraviolet radiation.

The mission is to demonstrate both the CNGB bus and the MiniCarb instrument in space. There is potential for an extension if the mission works.