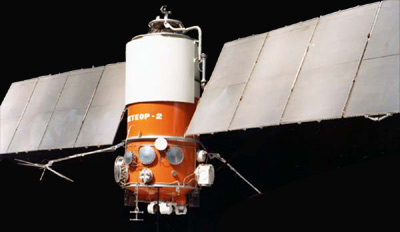 The Meteor-2 series was the second generation of soviet meteorological satellites. They were based on the Meteor-1 series.

The instrument complement consisted of three television-type (frame technique) VIS and IR scanners, a five-channel scanning radiometer and a radiometer (RMK-2) for measuring radiation flux densities in the near-Earth space.

Initially the satellites were orbited by the Vostok-2M launch vehicle, which was replaced beginning in 1982 with the Tsiklon-3 launch vehicle. They were flown in non-sun-synchronous polar orbits with altitudes between 850 and 950 km and inclinations of 81-82º

The Meteor-2 series was replaced by the Meteor-3 series.