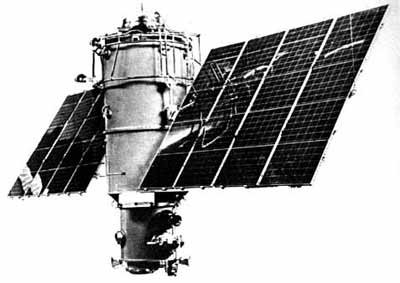 The Meteor-1 series was the first series of Soviet meteorological satellites.

These satellites were developed by VNIIEM. They consisted of a 3-axis stabilized pressurized body powered by two articulated solar panels.

The payload consisted of following instruments:

These satellites were orbited by Vostok-2M launched both from the Baikonur and Plesetsk cosmodromes. Due to the lack of performance of the launch vehicle, they were put into non-sun-synchronous polar orbits with a average altitude of 650 km for the first nine satellites and 900 km for the later satellites. Orbital inclination was 81-82º.

There were 11 satellites launched under the Kosmos designation and 25 more under the Meteor-1 name. Six more satellites - Meteor-1 18, 25, 28, 29, 30 and 31 - were in fact part of the Meteor-Priroda series. The Meteor-1 series was replaced by the more sophisticated Meteor-2 series.