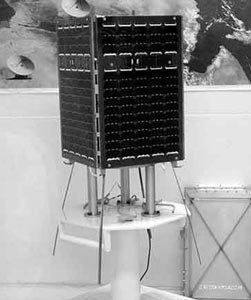 Mesbah 1 (persian for "lantern") is a small Iranian microsatellite for low earth orbit telecommunication, which has been in the works for the last eight years and reached maturity after collaboration between Iranian and Italian engineers. The Italian company Carlo Gavazzi Space (CGS), who assisted in the Iranian space effort to develop the Mesbah also contributed extensive knowledge to its partners, the ITRC (Iran Telecommunication Research Center) and IROST (Iranian Research Organization for Science and Technology).

The 65-75 kg Mesbah will, according official Iranian sources, be used as a tool for collecting data on ground and water resources and meteorological conditions, and will also be used to control power supply systems and pipelines. However, various intelligence sources report that the satellite will also have limited surveillance capabilities and will be used by Iran to gather intelligence information on neighboring countries including American bases in Iraq, the Persian Gulf and Israel. The satellite is expected to remain in orbit for three years and is reported to be able to continue operations for up to five years.

Mesbah 1 was scheduled to be launched in late 2005 onboard a Kosmos-3M launch vehicle from the Plesetsk cosmodrome, which did not happen. Italy has refused to hand over the USD10-million satellite to Iran under the pretext of UN Security Council resolutions slapped against the Islamic Republic. Currently the status of the satellite is unknown, but a planned launch on the Iranian Safir launch vehicle has been reported, but is unlikely to happen under the current circumstances.