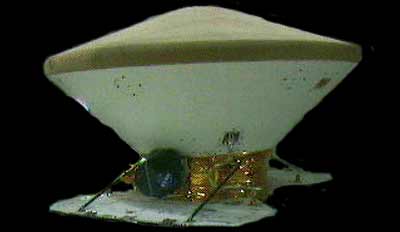 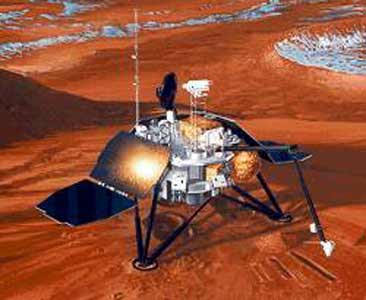 The Mars Surveyor '98 program is comprised of two spacecraft launched separately, the MCO (Mars Climate Orbiter, formerly the Mars Surveyor '98 Orbiter) and the MPL (Mars Polar Lander, formerly the Mars Surveyor '98 Lander). The two missions were designed to study the Martian weather, climate, and water and carbon dioxide budget, in order to understand the reservoirs, behavior, and atmospheric role of volatiles and to search for evidence of long-term and episodic climate changes. The last telemetry from Mars Polar Lander was sent just prior to atmospheric entry on 3 December 1999. No further signals have been received from the lander, the cause of this loss of communication is not known.

The Mars Polar Lander was to touch down on the southern polar layered terrain, between 73 S and 76 S, less than 1000 km from the south pole, near the edge of the carbon dioxide ice cap in Mars' late southern spring. The terrain appears to be composed of alternating layers of clean and dust-laden ice, and may represent a long-term record of the climate, as well as an important volatile reservoir. The mission had as its primary science objectives to:

These goals were to be accomplished using a number of scientific instruments, including a Mars Volatiles and Climate Surveyor (MVACS) instrument package which was comprised of a robotic arm and attached camera, mast-mounted surface stereo imager and meteorology package, and a gas analyzer. In addition, a Mars Descent Imager (MARDI) was planned to capture regional views from parachute deployment at about 8 km altitude down to the landing. The Russian Space Agency provided a laser ranger (LIDAR) package for the lander, which would be used to measure dust and haze in the Martian atmosphere. A miniature microphone was also be on board to record sounds on Mars. Attached to the lander spacecraft were a pair of small probes, the Deep Space 2 Mars Microprobes, which were to be deployed to fall and penetrate beneath the Martian surface when the spacecraft reached Mars.

The Mars Polar Lander consists of a hexagonal base composed of aluminum honeycomb with composite graphite epoxy face sheets supported on three aluminum landing legs. The lander stands 1.06 m tall and approximately 3.6 m wide. The launch mass of the spacecraft is approximately 583 kg, including 64 kg of fuel, an 82 kg cruise stage, a 140 kg aeroshell/heatshield, and the two 3.5 kg microprobes. A thermally regulated interior component deck holds temperature sensitive electronic components and batteries and the thermal control system. Two solar panels extend out from opposite sides of the base. Mounted on top of the base are the robotic arm, the stereo imager and mast, a UHF antenna, the LIDAR, the MVACS electronics, the meteorology mast and the medium gain dish antenna. The MARDI is mounted at the base of the lander, and the propellant tanks are affixed to the sides. During cruise, the lander is attached to the cruise stage and enclosed in the 2.4 meter diameter aeroshell.

The spacecraft was three-axis stabilized during cruise using star cameras and sun sensors in conjunction with inertial measurement units. Four hydrazine cruise reaction engine modules, each consisting of one 5-lbf trajectory correction maneuver thruster and one canted 1-lbf reaction control system thruster, provided attitude control. The descent and landing propulsion system consists of three groups of four pulse modulated 266 N hydrazine engines. Control and knowledge for descent and landing is provided by a 4 beam Doppler radar system and an AACS subsystem. The hydrazine is stored in two diaphragm tanks with a total capacity of 64 kg for both cruise and descent systems.

Communications between Earth and the spacecraft during cruise to Mars were via X-band using two solid state power amplifiers and a fixed medium gain antenna mounted on the cruise stage and backed up by a receive-only low gain antenna. During surface operations communications (downlink and uplink) would be via the UHF antenna on the lander to the Mars Climate Surveyor orbiter, which will function as a relay to Earth. Eight to ten relay passes over the lander would have been available from the orbiter each day, but the number of communications sessions would be limited by power demands. Uplink only communications to Earth were to be provided by the medium gain DTE (direct to Earth) 2-axis articulated antenna.

Mars Polar Lander and the attached Deep Space 2 probes were launched on a Delta-7425 which placed them into a low-Earth parking orbit. The third stage fired for 88 seconds at 20:57 UT 3 January 1999 to put the spacecraft into a Mars transfer trajectory and the spacecraft and third stage separated at 21:03 UT. Trajectory correction maneuvers were performed on 21 January, 15 March, 1 September, 30 October, and 30 November 1999.

After an 11 month hyperbolic transfer cruise, the Mars Polar Lander reached Mars on 3 December 1999. A final 30 minute tracking session begins at approximately 12:45 UT (7:45 a.m. EST) and was used to determine if a final thruster correction was necessary. Final contact to retrieve data on the status of the propulsion system was made from approximately 19:45 UT to 20:00 UT. At approximately 20:04, 6 minutes before atmospheric entry, an 80 second thruster firing was to turn the craft to its entry orientation. The Star 48 upper cruise stage was to be jettisoned at about 20:05 UT, and about 18 seconds later the microprobes were to be dropped from the cruise stage into the Martian atmosphere (also targeted at the southern polar layered terrain). The lander was to make a direct entry into Mars' atmosphere at 6.8 km/s at about 20:10 UT (3:10 p.m. EST). Due to lack of communication, it is not known at this time whether all these steps following final contact were executed, nor whether any of the descent plan described below took place as designed.

Initial deceleration would be simple aerobraking using the 2.4 meter ablation heat shield. The maximum time from atmospheric entry to landing would be 4 minutes 33 seconds. The inertial measurement unit would estimate the velocity throughout the entry and descent phase and the thrusters would keep the craft aligned. At an altitude of about 7.3 km at 500 meters per second the parachute would be deployed by a mortar followed by heat shield separation. Just before heat shield separation, the descent imager (MARDI) would turn on. The landing legs would be deployed 70 to 100 seconds before landing and the descent engines warmed up with short pulses. Then the parachute would be jettisoned and the descent engines fired, regulated by the spacecraft control system and the Doppler radar. The backshell would separate from the lander at about 1.4 km altitude at 80 m/s and the descent engines turned on to slow the descent and turn the flight path to vertical.

At 12 meters altitude the 2.4 m/s terminal descent phase was to begin. Engine shutoff would occur when one of the landing legs touched the ground. The horizontal landing velocity would be less than 2.4 m/s vertical and 1 m/s horizontal. The orientation of the lander is controlled by the AACS subsystem to maximize solar array efficiency and minimize obstruction of the DTE antenna. The lander would have touched down at approximately 20:15 UT Earth received time (3:15 p.m. EST) in the late southern spring season, during which the Sun will always be above the horizon at the landing site. The other times listed above are also Earth received times, light travel time from Mars at that point was approximately 14 minutes.

Immediately after landing the solar panels were to be deployed. The first signal from the lander was to reach Earth at 20:39 UT (3:39 p.m. EST), but was never received. This was to be the start of a 45 minute communications session. After this session the lander was to recharge its batteries for about 6 hours. On 4 December at 04:30 UT (11:30 p.m. EST December 3) a communications session was to begin which would have lasted about 2 1/4 hours. This session would have included images, including pictures from the Mars Descent Imager, but again no transmission was received. The first sounds from the Mars Microphone were to be released as early as 4 December and the first robot arm dig occur on 7 December. Science experiments would continue over the 90 day primary mission, with an extended mission to follow based on lander performance.