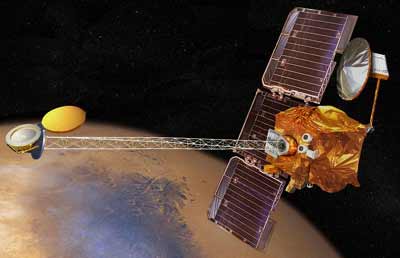 The 2001 Mars Odyssey, formerly MGM (Mars Global Mapper), is the remaining part of the Mars Surveyor 2001 Project, which originally consisted of two separately launched missions, The Mars Surveyor 2001 Orbiter and the Mars Surveyor 2001 Lander. The lander spacecraft was cancelled as part of the reorganization of the Mars Exploration Program at NASA. The orbiter, renamed the 2001 Mars Odyssey, will nominally orbit Mars for three years, with the objective of conducting a detailed mineralogical analysis of the planet's surface from orbit and measuring the radiation environment. The mission has as its primary science goals to gather data to help determine whether the environment on Mars was ever conducive to life, to characterize the climate and geology of Mars, and to study potential radiation hazards to possible future astronaut missions. The orbiter will also act as a communications relay for future missions to Mars over a period of five years.

The 2001 Mars Odyssey launched on 7 April 2001 at 15:02:22 UT (11:02:22 a.m. EDT). During the cruise to Mars, in August, the MARIE instrument failed to respond during a routine data transfer and was put into hibernation. Attempts to revive the instrument were successful in March 2002 and MARIE began taking scientific data from orbit on 13 March. The star tracker camera is having difficulties with too much stray light, it is thought that this will not affect its operation severely. After a seven month cruise the spacecraft reached Mars on 24 October 2001 at 02:26 UT (23 October 10:26 p.m. EDT). The spacecraft used a 19.7 minute main-engine propulsive maneuver to transfer into an 18.6 hour elliptical capture orbit and used aerobraking until 11 January 2002, when the spacecraft pulled out of the aerobraking orbit into a 201 × 500 km orbit. This orbit was trimmed over the next few weeks until it became a 2-hour, approximately 400 × 400 km polar science orbit on 30 January 2002. The Orbiter will act as a communications relay for the Mars 2003 Rovers, scheduled to arrive in January 2004, and possibly other future missions. Data will be collected from orbit until the end of the 917 day nominal mission in July 2004. The spacecraft will continue to act as a communications relay until October 2005.

The main body of the 2001 Mars Odyssey is box-shaped, 2.2 meters × 1.7 meters × 2.6 meters. The spacecraft has a launch mass of 725.0 kg, including 348.7 kg of fuel. The orbiter is divided into two modules, the upper equipment module holds the equipment deck which supports the engineering components and the science instruments. Above the equipment module, connected by struts, is the science deck, holding the star cameras, high energy neutron detector, UHF antenna, the THEMIS instrument and a deployable 6 meter boom holding the gamma sensor head for the GRS. A set of solar array panels extends out from one side of the main bus. A parabolic high-gain dish antenna is mounted on a mast extending from one corner of the bottom of the bus. The MARIE instrument is mounted inside the spacecraft. The lower part of the bus is the propulsion module. The main engine, a hydrazine and nitrogen tetroxide rocket which can produce 65.3 kg thrust, is mounted in the bottom part of the propulsion module, along with the fuel, oxidizer and helium pressurization tanks.

Attitude control is provided by four 0.1 kg thrusters and the spacecraft can be turned using four 2.3 kg thrusters. The spacecraft is three-axis stabilized using three primary reaction wheels and one backup. Navigation is provided by a Sun sensor, star camera, and inertial measurement unit. Power is provided by the gallium arsenide solar cells in the solar panel and a 16 amp-hr nickel hydrogen battery. Communications between the orbiter and Earth are in X-band via the high-gain antenna and communications between the orbiter and any Mars landers are via the UHF antenna. Thermal control is achieved using a system of heaters, radiators, louvers, insulating blankets and thermal paint. Command and data handling is through a RAD6000 computer with 128 Mbytes RAM and 3 Mbytes of non-volatile memory. [NASA]