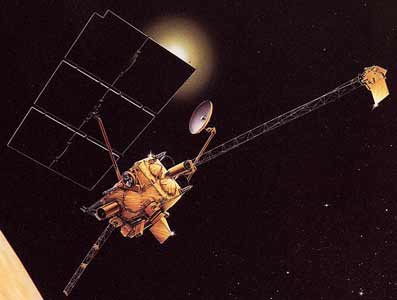 Mars Observer, the first of the Observer series of planetary missions, was designed to study the geoscience and climate of Mars. The primary science objectives for the mission were to:

The bus and electronics of the Observer series of spacecraft, used to study the terrestrial planets and near-Earth asteroids, were derived from the Satcom-4000 and DMSP-5D2/TIROS-N spacecraft. The rectangular bus section was 2.1 × 1.5 × 1.1 m. During the cruise phase of the mission, the high-gain antenna and the booms for the magnetometer (MAG/ER) and gamma-ray spectrometer (GRS) were partially deployed. When fully deployed, the two booms were each 6 m long. The 1.5 m diameter high-gain antenna was, when fully deployed, on a 5.5 m boom to allow for clearance over the solar array when the antenna was pointed toward Earth.

Pointing control for the spacecraft was maintained through the use of four reaction wheels. Attitude information was provided by a horizon sensor (which defined the direction of the nadir), a star mapper (for inertial attitude), gyros and accelerometers (for measuring angular rates and linear accelerations), and multiple Sun sensors. Power was provided through a six-panel solar array which, when fully deployed, measured 7.0 × 3.7 m. During the cruise phase, however, only four panels were deployed (due to the proximity of the spacecraft to the sun) to reduce the amount of power generated. During periods when the spacecraft was in Mars' shadow, energy was to be provided by two Ni-Cd batteries, each with a capacity of 43 amp-hours.

The interplanetary cruise phase of the mission was intended primarily for spacecraft and instrument checkout and calibration. Two periods of data collection for the MAG/ER and GRS and one for the gravitational wave experiment were planned for this phase as well. During the four month period from Mars orbital insertion until the spacecraft was to achieve its final mapping orbit, only data collection for the MAG/ER, GRS, and thermal emission spectrometer (TES) were scheduled. The mapping phase of the mission was scheduled to nominally last one Martian year. Mars Observer was also to support the acquisition of data from the Russian Mars 1994 mission through the use of the joint French-Russian-American Mars Balloon Relay instrument.

Contact with Mars Observer was lost on 21 August 1993, three days before scheduled orbit insertion, for unknown reasons and has not been re-established. It is not known whether the spacecraft was able to follow its automatic programming and go into Mars orbit or if it flew by Mars and is now in a heliocentric orbit. Although none of the primary objectives of the mission were achieved, cruise mode data were collected up to loss of contact. The total cost of the Mars Observer mission including development, construction, launch, and ground support is estimated at $980 million.