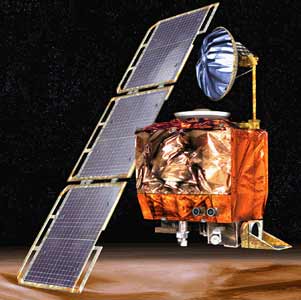 The Mars Surveyor '98 program is comprised of two spacecraft launched separately, the MCO (Mars Climate Orbiter, formerly the Mars Surveyor '98 Orbiter) and the MPL (Mars Polar Lander, formerly the Mars Surveyor '98 Lander). The two missions were to study the Martian weather, climate, and water and carbon dioxide budget, in order to understand the reservoirs, behavior, and atmospheric role of volatiles and to search for evidence of long-term and episodic climate changes. The Mars Climate Orbiter was destroyed when a navigation error caused it to miss its target altitude at Mars by 80 to 90 km, instead entering the Martian atmosphere at an altitude of 57 km during the orbit insertion maneuver.

The Orbiter has as its primary science objectives to:

Specifically it will observe and study dust storms, weather systems, clouds and dust hazes, ozone, distribution and transport of dust and water, the effects of topography on atmospheric circulation, atmospheric response to solar heating, and surface features, wind streaks, erosion, and color changes. The orbiter will use two instruments to carry out these investigations:

The orbiter will also serve as a data relay satellite for the Mars Polar Lander and other future NASA and international lander missions to Mars.

The Mars Climate Orbiter is a box shaped spacecraft about 2.1 m high, 1.6 m wide, and 2 m deep, consisting of stacked propulsion and equipment modules. The total spacecraft launch mass of 629 kg includes 291 kg of propellant. An 11 square meter solar array wing, measuring 5.5 m tip-to-tip, is attached by 2-axis gimbal to one side and a 1.3 m diameter high-gain dish antenna is attached by 2-axis gimbal to a mast at the top of the propulsion module. The MARCI and PMIRR instruments, as well as a UHF antenna and battery enclosure, are mounted to the bottom of the equipment module.

Propulsion is achieved via a 640-N bi-propellant (hydrazine/nitrogen tetroxide) main engine, mounted with the propellant tanks in the propulsion module, and hydrazine thrusters. The orbiter is 3-axis stabilized. Attitude control and maneuvering capability is provided by four 7-Nm thrusters (pitch/yaw) and four 0.3-Nm thrusters (roll) in combination with reaction wheels. Attitude is determined using an inertial measurement unit, a star tracker, and analog Sun sensors with knowledge of 25 mrad and stability of 1.5 mrad/(1 sec) and 3 mrad/(3 sec).

Spacecraft power is provided by 3 panels of GaAs/Ge solar cells on the 5.5 meter long single-wing solar array which provide 1000 W of power at Earth and 500 W at Mars. Power is stored in nickel hydride (NiH2) common pressure vessel batteries. Thermal control is achieved through a combination of louvers, MLI, Kapton, paints, radiators and heater circuits. Communications with Earth are in X-band using Cassini Deep Space Transponders and 15 W RF solid state power amplifiers through the 1.3 m high gain antenna for both uplink and downlink, a medium gain transmitting antenna, and a low-gain receiving antenna. A 10 W UHF system is used for 2-way communications with the Mars Polar Lander. A RAD6000 processor is used for on-board command and data handling.

Mars Climate Orbiter was launched on a Delta-7425 . Launch was at 18:45:51 UT (1:45:51 p.m. EST) on 11 December 1998 from Pad A of Launch Complex 17 at Cape Canaveral Air Station, Florida. After a brief cruise in Earth orbit, the Delta II 3rd stage put the spacecraft into trans-Mars trajectory and about 15 days after launch the largest trajectory correction maneuver (TCM) was executed using the hydrazine thrusters. During cruise to Mars, three additional TCM's using the hydrazine thrusters were performed on 4 March, 25 July, and 15 September 1999.

The spacecraft reached Mars and executed a 16 minute 23 second orbit insertion main engine burn on 23 September 1999 at 09:01 UT (5:01 a.m. EDT) Earth received time (ERT, signal travel time from Mars will be 10 minutes 55 seconds). The spacecraft passed behind Mars at 09:06 UT ERT and was to re-emerge and establish radio contact with Earth at 09:27 UT ERT, 10 minutes after the burn was completed. However, contact was never re-established and no signal was ever received from the spacecraft. Findings of the failure review board indicate that a navigation error resulted from some spacecraft commands being sent in English units instead of being converted to metric. This caused the spacecraft to miss its intended 140 - 150 km altitude above Mars during orbit insertion, instead entering the Martian atmosphere at about 57 km. The spacecraft would have been destroyed by atmospheric stresses and friction at this low altitude.

The burn would have slowed the spacecraft and put it into a 14 hour elliptical (~150 x 21,000 km) capture orbit. The orbiter was to begin aerobraking, using the solar panel to provide resistance and continue until a 90 × 405 km orbit was achieved, nominally on 22 November 1999, with periapsis at 89 N. The hydrazine thrusters would be used to change the orbit to a 2-hour, 421 km near-circular polar science mapping orbit on 1 December 1999. The orbit was to be nearly Sun-synchronous, crossing the daytime equator at about 4:30 p.m. local time. The first phase of the mission was to support the Mars Polar Lander from its landing on Mars on 3 December 1999 to the end of the lander primary mission on 29 February 2000. The orbiter would pass over the lander site 10 times per Martian day for 5-6 minutes each time, communicating via the UHF 2-way relay link at 128 kbits/s. Mars science operations and mapping, involving operation of the MARCI and PMIRR, would initiate on 3 March 2000 and continue for one Martian year (687 days). At the end of the mapping mission on 15 January 2002, the orbiter was to be placed in a stable orbit and function as a UHF relay for the Mars 2001 mission.