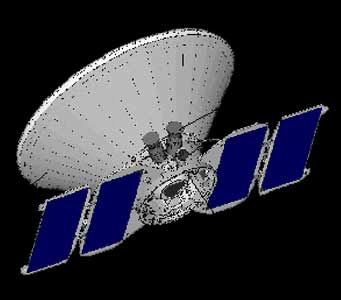 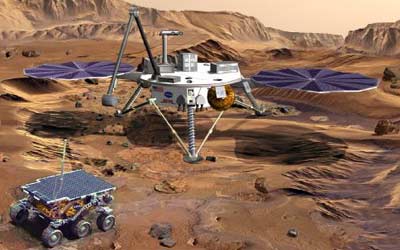 The launch window for the Mars Surveyor 2001 Lander opens on 10 April 2001. The lander is scheduled to reach Mars on 22 January 2002 after being entirely enclosed in a capsule for the nine-month cruise. The spacecraft will enter Mars' atmosphere directly from the hyperbolic approach trajectory. Five minutes before entry the cruise stage will be jettisoned. The entry sequence starts at 125 km altitude with an entry velocity of 7.8 km/s at a 20 degree angle. At 226 seconds after entry at an altitude of 9 to 10 km the parachute is deployed. Images will be taken during the descent.

Ten seconds after parachute deployment the aeroshell is released. At an altitude (measured by altimeter) of 1.43 km (approximately 269 seconds after entry) the descent rockets are ignited and the lander legs deployed. The parachute and backshell are released 2 seconds after ignition. Landing takes place about 37 seconds later at a velocity of 2.5 m/s. After landing there will be a period for functional checkout, lander deployments, and return of critical lander images. This will be followed by rover deployment and then by science activities. The target is 15 degrees south latitude, 315 degrees longitude and landing will take place during late southern summer. The nominal lander lifetime on the surface is 100 martian days, with limited capabilities for another 50 days or so. These times will vary depending on the exact landing latitude. The batteries and systems will freeze during the winter, but some may be revivable the following summer.

The lander is a platform mounted on three landing legs which holds the fuel tanks and propulsion units, topped by a platform holding the science experiments. The mission will be based on the Mars '98 Polar Lander and will include the Mars Descent Imager (MARDI), the Mars Radiation Environment Experiment (MARIE), designed to study the radiation environment at the surface, a Panoramic Camera (PanCam), a small Thermal Emission Spectrometer (Mini-TES), the Mars Environment Compatibility experiment (MECA), designed to measure the toxicity to humans of martian soil and dust, the Mars In-situ Propellant production experiment (MIP), and a robotic arm and camera. These experiments make up the Athena precursor experiment (APEX) package. The lander will also carry a small sundial, pictures of which will be taken with the PanCam, and will be equipped with a radiation monitor, UHF transmitters and antennas, as well as the rover. Lander power is provided by 3 square meters of solar cells and two 12 amp-hour lithium-ion batteries providing approximately 25 to 30 W during the day. Most lander activities will be turned off at night. Communications will be through a UHF relay to the Mars 2001 Surveyor Orbiter and the Mars '98 Orbiter. Two uplink sessions are planned per day. The fully-fueled launch mass of the spacecraft is 628 kg, the landed mass will be 328 kg.

The Athena rover, originally planned for this mission, has been postponed until 2003, the rescoped 2001 mission will use the "Marie Curie" rover, a near-duplicate of the Mars Pathfinder "Sojourner" rover. It carries an Alpha-Proton X-ray Spectrometer (APXS), stereo black and white front cameras and a mono black and white rear camera. The APXS, a duplicate of the one used on Mars Pathfinder with minor modifications, is mounted on the back of the rover and will be used to study the composition of rocks and soils. The rear camera is for close-up imaging of the APXS targets and terrain imaging. The front cameras are also for terrain imaging as well as hazard detection.

The rover is a six-wheeled vehicle, 28 cm high, 63 cm long, and 48 cm wide with a ground clearance of 13 cm, mounted on a "rocker-bogie" suspension. It has a mass 13.81 kg. It has 6 wheels, each with its own drive motor. Four of the wheels are steerable. The wheels are 13 cm in diameter and 8 cm wide. Electronics and batteries are stored in an insulated warm electronics box which is heated by 3 RHU's. Additional electronic heating is maintained during daytime. Power is provided by 0.2 square meters of GaAr/Ge solar cells mounted on the flat top of the rover. Maximum power is 16 W at noon, greater than 10 W will be produced for 6 hrs each sol. Non-rechargeable lithium thionyl chloride (LiSOCl2) D-cell batteries provide backup. Communications are via UHF antenna and 9600 baud modem with the lander. The modem gives line-of-sight communication up to 500 m and an effective data transfer rate of 2 Kbps. On-board computing uses a single Intel 80C85 2 MHz CPU with 100 KIPs, 64 kB RAM main memory and 512 kB RAM temporary data storage.

After landing, the rover will be unstowed from the lander and deployed by the lander robotic arm. The rover is controlled by commands sent from the ground to the lander and on to the rover. Ground controllers use images returned by the lander panoramic camera and rover cameras to determine the route commands to uplink. The rover uses wheel odometers to determine distance travelled. On-board hazard avoidance equipment includes accelerometers to determine tilt angle, laser stripers, and contact sensors. The rover also has a "waypoint" driving capability, in which coordinates of a destination can be sent to the rover and it will use its on-board navigation system to avoid obstacles and travel to the target. The top speed of the rover is 0.6 cm/sec. It is planned that the rover will traverse over 100 m during the mission, up to 10 m from the lander. The rover will only be active during the day and go into a hibernation stage at night.

This mission has been cancelled as part of the review and restructuring of NASA's Mars Exploration Program. The spacecraft was refurbished and launched as the first Mars Scout mission as Phoenix.