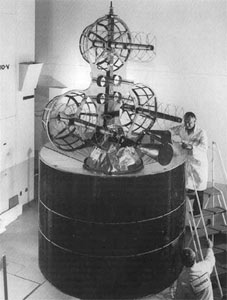 A new application of synchronous satellite communications technology was unveiled in 1976 with a three-ocean maritime satellite system that is providing telecommunications services in the Atlantic, Pacific, and Indian Oceans.

Hughes Aircraft Company under contract to Comsat General Corporation built three multifrequency communications spacecraft called Marisat for the space segment of the world's first maritime system. All three satellites were launched during 1976, one each on February 19, June 9, and October 14. The satellites were placed in geosynchronous orbit at 15 degrees W, 176.5 degrees E, and 72.5 degrees E longitude, respectively.

Before the launch of Marisat, the American Institute of Merchant Shipping emphasized the need for functional transoceanic communications to maintain ship-to-shore contact with globe-circling ships on the high seas. According to the Institute, ship owners had previously reported being out of contact with their ships for as long as 48 hours, and the average delay for a message had been about 12 hours.

For commercial shipping, the Marisat system is providing high quality communications channels around the clock.

Launch vehicle for the satellites was the McDonnell Douglas Delta-2914. At liftoff, Marisat weighed about 1450 pounds (656 kilograms). Each satellite is 12 feet 6 inches (3.81 meters) in height and 7 feet 1 inch (2.15 meters) in diameter. A cylindrical solar panel, covered with approximately 7000 solar cells, supplies each satellite with primary power of 330 Watts. The satellites were launched from Cape Canaveral by the National Aeronautics and Space Administration under contract with Comsat General.