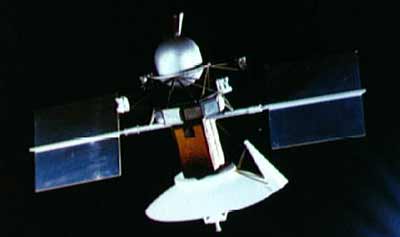 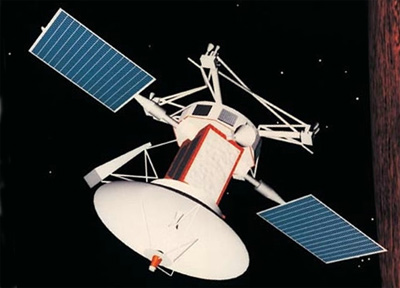 The Magellan spacecraft was a Venus orbiter with the primary objectives of the Magellan mission were to map the surface of Venus with a synthetic aperture radar (SAR) and to determine the topographic relief of the planet. At the completion of radar mapping 98% of the surface was imaged at resolutions better than 100 m, and many areas were imaged multiple times.

The spacecraft consisted primarily of a large (3.7 m) high-gain antenna dish which served the dual purpose of communications and science instrument for the SAR. The spacecraft was about 6.4 m long and, with the solar panels extended, about 9.2 m across. Behind the dish was a rectangular section containing the radar sensor electronics, reaction wheels, and batteries. Behind this section lay a decahedral bus, which included the solar panel array, star scanner, a medium-gain antenna, the on-board computer and two tape recorders. Behind the bus lay the propulsion module. The two 5.8 m solar panels were used for powering the spacecraft and charging the spacecraft's nickel-cadmium batteries. These batteries provided the 28 V of power needed during solar occultation to allow normal spacecraft operations. Pointing control was maintained through the use of three electrically powered, orthogonal reaction wheels. Large scale orbital corrections, both in transit to Venus as well as after orbital insertions, was accomplished through the use of a monopropellant (hydrazine) thruster system. The thrusters were also used to permit desaturation of the momentum wheels. The coherent X- and S-band radio subsystem was used for communications as well as by the gravity field experiment.

A total of 4225 usable SAR imaging orbits was obtained by Magellan. Each orbit typically covered an area 20 km wide by 17,000 km long, at a resolution of 75 m/pixel.

The Magellan mission scientific objectives were to study land forms and tectonics, impact processes, erosion, deposition, chemical processes, and model the interior of Venus. Magellan showed us an Earth-sized planet with no evidence of Earth-like plate tectonics. At least 85% of the surface is covered with volcanic flows, the remainder by highly deformed mountain belts. Even with the high surface temperature (475°C) and high atmospheric pressure (92 bars), the complete lack of water makes erosion a negligibly slow process, and surface features can persist for hundreds of millions of years. Some surface modification in the form of wind streaks was observed. Over 80% of Venus lies within 1 km of the mean radius of 6051.84 km. The mean surface age is estimated to be about 500 My. A major unanswered question concerns whether the entire surface was covered in a series of large events 500 My ago, or if it has been covered slowly over time. The gravity field of Venus is highly correlated with the surface topography, which indicates the mechanism of topographic support is unlike the Earth, and may be controlled by processes deep in the interior. Details of the global tectonics on Venus are still unresolved.