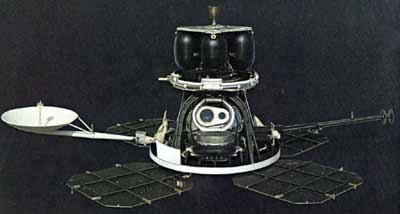 The Lunar Orbiter program consisted of five Lunar Orbiters which returned photography of 99% of the surface of the Moon (near and far side) with resolution down to 1 meter. Altogether the Orbiters returned 2180 high resolution and 882 medium resolution frames. The micrometeoroid experiments recorded 22 impacts showing the average micrometeoroid flux near the Moon was about two orders of magnitude greater than in interplanetary space but slightly less than the near Earth environment. The radiation experiments confirmed that the design of Apollo hardware would protect the astronauts from average and greater-than-average short term exposure to solar particle events. The use of Lunar Orbiters for tracking to evaluate the Manned Space Flight Network tracking stations and Apollo Orbit Determination Program was successful, with three Lunar Orbiters (2, 3, and 5) being tracked simultaneously from August to October 1967. The Lunar Orbiters were all eventually commanded to crash on the Moon before their attitude control gas ran out so they would not present navigational or communications hazards to later Apollo flights. The Lunar Orbiter program was managed by NASA Langley Research Center at a total cost of roughly $200 million.

The main bus of the Lunar Orbiter had the general shape of a truncated cone, 1.65 meters tall and 1.5 meters in diameter at the base. The spacecraft was comprised of three decks supported by trusses and an arch. The equipment deck at the base of the craft held the battery, transponder, flight progammer, inertial reference unit (IRU), Canopus star tracker, command decoder, multiplex encoder, traveling wave tube amplifier (TWTA), and the photographic system. Four solar panels were mounted to extend out from this deck with a total span across of 3.72 meters. Also extending out from the base of the spacecraft were a high gain antenna on a 1.32 meter boom and a low gain antenna on a 2.08 meter boom. Above the equipment deck, the middle deck held the velocity control engine, propellant, oxidizer and pressurization tanks, Sun sensors, and micrometeoroid detectors. The third deck consisted of a heat shield to protect the spacecraft from the firing of the velocity control engine. The nozzle of the engine protruded through the center of the shield. Mounted on the perimeter of the top deck were four attitude control thrusters.

Power of 375 W was provided by the four solar arrays containing 10,856 n/p solar cells which would directly run the spacecraft and also charge the 12 amp-hr nickel-cadmium battery. The batteries were used during brief periods of occultation when no solar power was available. Propulsion for major maneuvers was provided by the gimballed velocity control engine, a hypergolic 100-pound-thrust Marquardt rocket motor. Three-axis stabilization and attitude control were provided by four one lb nitrogen gas jets. Navigational knowledge was provided by five Sun sensors, Canopus star sensor, and the IRU equipped with internal gyros. Communications were via a 10 W transmitter and the directional 1 meter diameter high gain antenna for transmission of photographs and a 0.5 W transmitter and omnidirectional low gain antenna for other communications. Both antennas operated in S-band at 2295 MHz. Thermal control was maintained by a multilayer aluminized mylar and dacron thermal blanket which enshrouded the main bus, special paint, insulation, and small heaters.

The photographic equipment was based on the Samos-E1 system and consisted of a dual-lens camera system designed to satisfy the primary mission objective of providing photographic information for the evaluation of Apollo and Surveyor landing sites. An 80 mm lens system was used to obtain Medium-Resolution (MR) photos, and a 610 mm lens system was used for High-Resolution (HR) photos. The two separate lens, shutter, and platen systems utilized the same film supply and recorded imagery simultaneously in adjacent areas of 70 mm film. Automatic sequences of 1, 4, 8, or 16 photos were obtained. At an altitude of 46 km, which was approximately the perilune height, the HR system photographed a 4.15 by 16.6 km area of the lunar surface which was centered on a 31.6 by 37.4 km area photographed by the MR system. At apolune, which occured on the farside at about 1850 km altitude, the areas photographed were correspondingly larger. The film was bimat processed on board and optically scanned, and the resulting video signal was telemetered to ground stations. Film density readout was accomplished by a high-intensity light beam focused to a 6.4 micron-diameter spot on the spacecraft film. The spot scanner swept 2.67 mm in the long dimension of the spacecraft film. This process was repeated 286 times for each millimeter of film scanned. The raster was composed of 2.67 by 65 mm scan lines along the film. The video signal received at the ground station was recorded on magnetic tape and also fed to Ground Reconstruction Equipment (GRE), which reproduced the portion of the image contained in one raster on a 35 mm film positive framelet. Over 26 framelets were required for a complete MR photograph and 86 for a complete HR image.