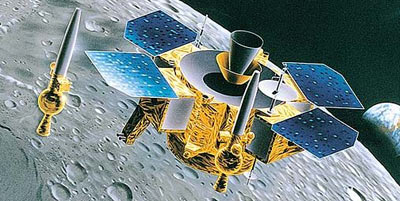 Lunar-A was a planned Japanese lunar orbiter and surface penetrator mission by ISAS, which was cancelled after numerous delays.

The scientific objectives of the mission to the Moon were to image the surface of the Moon, to monitor moonquakes, measure the near-surface thermal properties and heat flux, and to study the lunar core and interior structure. To achieve these objectives, Lunar-A was to carry a mapping camera and two surface penetrators. The surface penetrators were equipped with seismometers and devices to measure heat flow. The seismometers was to monitor moonquake activity over the course of a year and this information was to be used to learn about the structure of the Moon's interior and the size of the core. The heat flow measurements was to provide information on the thermal state and evolution of the Moon.

After launch, Lunar A was to go into Earth parking orbit. The spacecraft was to then be injected into an orbit around the Earth and Moon by a kick stage. After four and a half of these orbits, Lunar-A was to swing out into a wide single orbit with an apogee of 1,185,000 km. At the end of this orbit the spacecraft was to re-encounter the Moon and be inserted into lunar orbit. This orbit was to have an inclination of 30 degrees and bring Lunar-A within 40 km of the Moon's surface. The spacecraft was to deploy two 13 kg penetrators over the course of a month. They were to be individually released and impact the Moon at 250 to 300 m/s, burrowing 1 to 3 meters into the surface. One penetrator was to be targeted at the equatorial area of the near side (in the vicinity of the Apollo 12 and 14 landing sites) and one at the equatorial far side. After deploying the penetrators, the orbiter was to move up to a 200 to 300 km near circular mapping orbit. Data was to be stored in memory in the penetrators and transmitted to the orbiter when it transits over each penetrator every 15 days.

Originally planned for a 1995 M-5 [KM-V1] launch, Lunar-A was delayed for several years, but although the M-5 launch vehicle program ended in 2006, no replacement launch vehicle had been selected. In early 2007 JAXA recommended to cancel the Lunar-A probe, as the development of the penetrator probes has taken so long that the mission's orbiter mother ship, which was built 10 years ago, has fallen into disrepair and would require too much money to fix.

The penetrators developed for Lunar-A were then to be flown on the Russian Luna-Glob orbiter mission, which was in turn also cancelled.