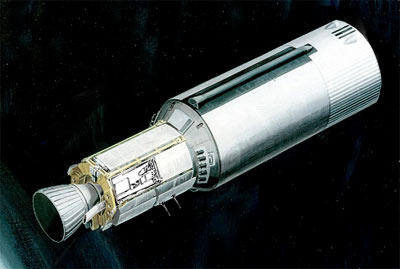 LOGACS (Low Gravity Accelerometer Calibration System) was an extremely sensitive accelerometer, which was flown in May of 1967 in satellite orbit and successfully gathered approximately 100 hr of precise deceleration data.

A unique feature of the experiment was the accurate calibration of the accelerometer in the orbital environment at a level commensurate with the very low non-conservative forces to be sensed. It consisted of a Bell MESA accelerometer mounted on a rotating platform to spectrally shift low-frequency errors in the accelerometer.

For calibration, LOGACS utilized a turntable with the accelerometer mounted so that the center of mass of the sensitive element is a known distance from the center of rotation and the turntable acts as a centrifuge with a known angular velocity.-

LOGACS (Module 474) was mounted as a piggy-back payload on an Agena-D stage, which orbited the KH-7 37 reconnaissance satellite. Also mounted on the stage was an Agena engine diagnostics payload (Module 473).

This payload gathered about 100 hours of of precise deceleration data and reentered on 27 May 1967.