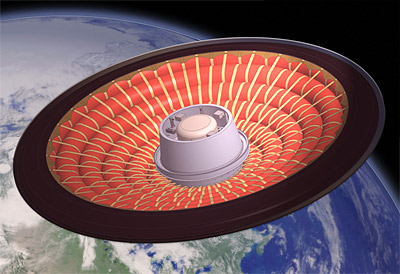 The Low-Earth Orbit Flight Test of an Inflatable Decelerator (LOFTID) is a public private partnership between NASAs Space Technology Mission Directorate and United Launch Alliance (ULA). The LOFTID project is poised to revolutionize the way NASA and industry deliver payloads to a planets surface or into orbit, utilizing aerodynamic forces instead of propulsion. Since NASAs inception in 1958, the agency has relied heavily on retro-propulsion (rockets) and rigid heat shields to decelerate people, vehicles and hardware, during orbital entry, decent, and landing (EDL) operations.

After more than a decade of development of the Hypersonic Inflatable Aerodynamic Decelerator (HIAD) technology, including two suborbital flight tests, the LOFTID orbital flight test is the next logical step. Return from orbit provides an entry environment relevant to many potential appliocations, paving the way for its use on future missions. HIAD technology can enhance, and even enable, larger missions to higher elevations at Mars. It can also be applied at Earth, providing capability for International Space Station (ISS) down-mass, or even enabling return for free-flying orbital manufacturing. Recovery of spent launch vehicle assets for reuse, such as ULAs plan to recover their first stage booster, can reduce the overall cost of access to space.

For destinations with a sensible atmosphere, aerodynamics (specifically atmospheric drag) provides the most mass-effective way to decelerate a payload to a soft landing, or capture it into orbit. Larger aerodynamic decelerators, or aeroshells, provide more drag force, and therefore allow larger masses to be delivered to any elevation. HIAD overcomes packaging limitations of current rigid systems by utilizing inflatable soft-goods materials that can be stowed within the launch vehicle shroud. The aeroshell is deployed outside the atmosphere prior to atmospheric entry. HIAD technology enables lower mass solution for slowing a spacecraft during EDL. Ultimately, increased payload mass fraction means cost savings.

Vehicles entering an atmosphere from outer space are traveling so fast that they create a high-energy pressure wave. This pressure wave entraps and rapidly compresses atmospheric gases, resulting in drag forces that decelerate the vehicle coupled within intense thermal loads that heat its surface. The HIAD design consists of an inflatable structure that maintains the aeroshell shape against the drag forces, and a protective flexible thermal protection system (FTPS) that withstands the thermal loading. The term flexible refers to the FTPS being foldable, packable, deployable, and tailorable as opposed to being stretchable.

Normally, soft-goods materials would not be considered for the loads and environments that a spacecraft would encounter during atmospheric entry. Materials advancement is the key. However, the inflatable structure is constructed out of a stack of pressurized concentric tubes, or tori, that are strapped together to form an exceptionally strong blunt cone shaped structure. The tori are constructed from braided synthetic fibers that are 15 times stronger than steel. While the inflatable structure has the capability to withstand temperatures beyond 350° C, the HIAD relies on the FTPS to survive entry temperatures. The FTPS, which covers the inflatable structure and insulates it from the searing heat of atmospheric entry, can be separated into three functional layers: an exterior ceramic fiber cloth layer that can maintain integrity at surface temperatures in excess of 1600° C, protecting the underlying plys from the aerodynamic shear forces; a middle layer of high temperature insulators that inhibit heat transmission; and an interior impermeable gas barrier layer that prevents hot gas from reaching the inflatable structure.

When the aeroshell is fully inflated, the Centaur attitude control system spins up the spacecraft and performs a final pointing adjustment before releasing the RV on its spin-stabilized reentry trajectory. The Centaur then performs a divert maneuver to avoid re-contact with the RV as the Centaur burns up on reentry. The RV reenters the atmosphere on the prescribed trajectory, and decelerates from hypersonic down to subsonic flight. Throughout the RV flight, a real-time beacon transmits minimal data packets to a satellite network, while data from instrumentation, cameras, and other subsystems is aquired and processed, sending duplicate comprehensive data to both an Internal Data Recorder (IDR) and an Ejectable Data Recorder (EDR). After reentry, the RV ejects the EDR, which is buoyant and provides a GPS locator signal for physical recovery from the ocean surface. As a secondary means of recovery provided by ULA, the RV deploys a parachute to enable a soft splash down and boat retrieval of the RV from the ocean surface.