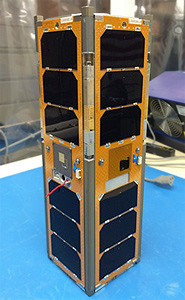 The Low Mass Radio Science Transponder (LMRST) is a bare-bones, two-way Doppler and ranging transponder, based on well established navigation techniques in use by the Deep Space Network. The proposed LMRST-Sat would be a TRL-raising demonstration mission for a developmental model of the X-Band LMRST exciter. Ka-Band and higher power versions of the instrument are also in development.

In addition to navigation throughout the solar system, LMRST would enable radiometric science such as gravity field determination and planetary atmosphere profiling via radio occultation.

LMRSTSat was originally planned to be a 2U cubesat, but the spacecraft was enlarged during development to the 3U size.

In 2011, LMRSTSat was down-selected for a launch opportunity through the NASA ELaNa program. It was launched on the ELaNa-12 mission.