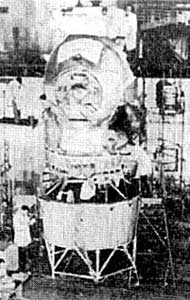 LK (Lunnyi Korabl) was the soviet crewed lunar lander. It had only space for one cosmonaut, which had to enter the LK by EVA. It was a one stage design, with the same stage providing landing and lift off operation. At lunar lift off, the landing gear was discarded.

The propulsion consisted of 2 independent punp-fed engined. The single chamber RD-858 of the 2050 kp main engine is at the centre. It is flanked by the two nozzles of the RD-859 2045 kp backup engine. At landing or takeoff, both engines would ignite. Only if both engines were operating, one would shut down. Clamshell doors were to be closed over the engines after landing for insulation and to protect them from lunar soil contamination.

The T2K was an orbital uncrewed prototype without landing gear.