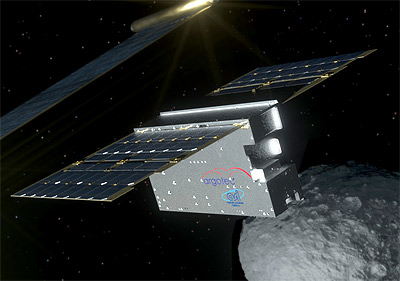 LICIACube (Light Italian Cube sat for Imaging of Asteroids) is a project coordinated by the Italian space agency for the development of a SmallSat built in the Argotec laboratories in Turin. The mission to monitor effects of the impact of NASA's DART asteroid impact probe, the crater and the evolution of the debris produced by the collision.

The 14 kg spacecraft is based on ArgoMoon. The payload consists of two electro-optical imagers for narrow and wide range. It will use an autonomous navigation system, an integrated propulsion system, and an advanced on-board computer to collect basic scientific data for the development techniques to prevent potential impacts with asteroids.

The imagers on baord are:

The scientific objectives of the LICIACube mission can be summarized as follows:

LICIACube was launched on board of DART, where it remained for 16 months of the cruise phase before it was deployed 12 September 2022.