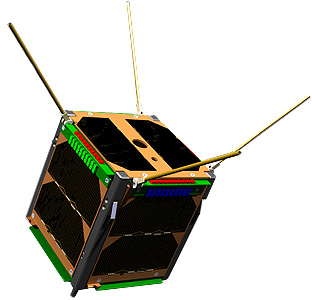 LEDSAT (LED-based small Satellite) is an 1U CubeSat developped by the S5Lab research group at Sapienza - University of Rome and is equipped with LEDs (Light Emitting Diodes) and retroreflectors for optical tracking with ground-based telescopes and laser ranging observatories.

The idea has been conceived and designed by an Italian student team from Sapienza - University of Rome in cooperation with professors and students from the Astronomy Department of University of Michigan. This educational CubeSat will be developed by the S5Lab (Sapienza Space Systems and Space Surveillance Laboratory) research team at Sapienza - University of Rome. The mission aims to be a milestone for calibrating orbit determinations systems based on optical measurements in LEO regimes.

It will permit to evaluate performances and reliability of actual systems, sensors and algorithms for orbit determination. Moreover, it will also test the LED-based technology for attitude determination through light curve measurements and low rate light flashing communication using a pulse code.

Currently ground-based optical tracking of satellites in LEO faces multiple challenges. The satellite must be in sunlight, while the ground-based telescope must be in darkness. By having LEDs as an on-board payload to actively illuminate the satellite, the number of passes in which LEDSAT will be visible from telescope increases resulting in a higher accuracy and precision in tracking. The ground-based measurements will be performed during the whole mission lifetime by a network of six different observatories located at medium and equatorial latitudes.

The LEDSAT mission willing to explore new and promising techniques conceived for gathering important information about the status of the in-orbit CubeSat.