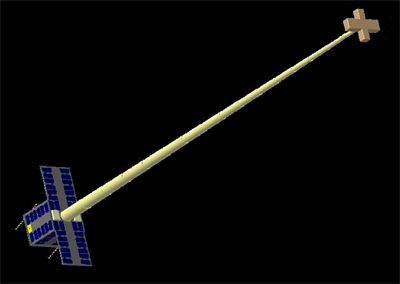 The LEAP (Low-frequency Earthquake Precursor) nanosatellite is an earthquake precursor research mission of the National Cheng Kung University (NCKU) of Tainan, Taiwan. The goal is to detect the ULF emission in space to confirm postulations on the correlation between the presence of ELF/ULF (Extremely Low Frequency/Ultra Low Frequency) signals and earthquake activities so as to pave a way for earthquake detection.

Similar satellite missions, such as the DEMETER (CNES) and QuakeSat (Stanford University) satellites, are being flown with instrumentation to detect the ULF/ELF signals in space. The main significance of the LEAP project lies in the ULF range signal which is lower than DEMETER (VLF) and QuakeSat (ELF). The other significance for the LEAP mission is the near equatorial orbit, providing an Earth magnetic filed observation rather than synchronized orbits of QuakeSat and DEMETER. In addition, some analysis capability is built into the onboard digital processor of the LEAP spacecraft to track the variation of ELF/ULF signal frequency.

The ULF sensor is mounted on top of a gravity gradient boom.

The LEAP project intends to serve as a testbed by utilizing several subsystem/payload techniques developed and fabricated in Taiwan. These domestic components include GPS receiver software, a MEMS-based digital sun sensor, and a high frequency communication experiment payload.

LEAP was planned to be launched as a secondary payload in the 2010/2011 timeframe.

The mission was cancelled in 2012 due to budgetary constraints, although the development had been completed.