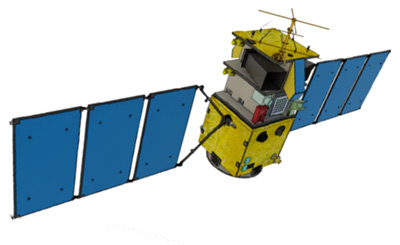 Lattes is a brazilian small scientific satellite to be launched in 2017 featuring a and a x-ray astronomy payload.

It will be built on INPE's Plataforma Multimissão (MMP) and will feature the EQUARS and MIRAX payloads, which were originally planned as dedicated satellites. The two payloads will be operational alternating for each six months.

EQUARS (Equatorial Atmosphere Research Satellite) is mission to monitor Earth's equatorial low, middle and upper atmosphere and ionosphere on a global scale, with a special emphasis in dynamical and photochemical energy transport processes.

Real-time monitoring of the tropospheric water vapor, stratospheric temperature profile and total electron contents (TEC) in the ionosphere by the GPS occultation measurements will make it possible to carry on high quality numerical weather and climate predictions and space weather forecasting. In order to achieve it, close collaborative operation with the COSMIC project is proposed.

MIRAX (Monitor e Imageador de Raios-X) is a small-scale x-ray astronomy payload, which will use the BeppoSAX flight spare WFC camera (Soft X-Ray Imager), as well as a wide-field hard X-ray detector (Hard X-Ray Imager) to be built by UCSD.

Lattes appears to have been split up again into two separate satellites, EQUARS and MIRAX.