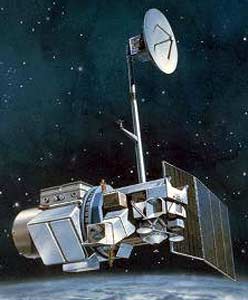 The Landsat 4 system was an experimental earth resources monitoring system with the new powerful remote-sensing capabilities of the thematic mapper (TM), and it provided a transition for both foreign and domestic users from the multispectral scanner (MSS) data to the higher resolution and data rate of the TM. It had a complete end-to-end highly automated data system, which was designed to be a new generation system, and was a major step forward in global remote-sensing applications. The Landsat 4 mission consisted of an orbiting satellite (flight segment) with the necessary wideband data links and support systems, and a ground segment. The Landsat 4 flight segment consisted of two major systems:

The flight segment was designed with 3 years nominal lifetime in orbit and could be extended through in-orbit replacement capability when the Space Shuttle became operational. The spacecraft was placed into an orbit having a descending node equatorial crossing between 9:30 and 10:00 a.m. local time. The spacecraft and attendant sensors were operated through the GSTDN stations before the Tracking And Data Relay Satellite System (TDRSS) was available. Landsat 4 was decommissioned on 15 June 2001.

An identical back-up spacecraft, Landsat-D Prime (NSSDC ID Landsat-E) was placed in storage and launched on 1 March 1984 as Landsat 5.

The MSS instrument was turned off in August of 1995, but turned on again in 2011 after the TM instrument was shut down. The TM instrument was still in operation, some 25 years after its planned design life and data were regularly acquired at stations in the U.S. and Australia for entry into the U.S. archive. A number of International Ground Stations downloaded data for their local acquisition area. In November 2011, U.S. Geological Survey (USGS) stopped acquiring TM images from the 27-year-old Landsat 5 Earth observation satellite due to a rapidly degrading electronic component. In Dec. 2012, USGS annoucned that Landsat 5 would be decommissioned in early 2013. Landsat 5's last operational image collection event took place on 6 January 2013 with the MSS instrument. Outliving its three-year design life, Landsat 5 delivered high-quality, global data of Earth's land surface for 28 years and 10 months. After decomissioning, the orbit of landsat 5 was lowered until fuel was depleted. On 5 June 2013, the final command to shut down all moving parts and the transmitter was sent.