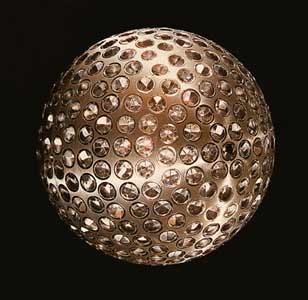 LAGEOS (Laser Geodynamics Satellite) was designed by NASA and launched in 1976. It was the first spacecraft dedicated exclusively to high-precision laser ranging and provided the first opportunity to acquire laser-ranging data that were not degraded by errors originating in the satellite orbit or satellite array. LAGEOS-2, based on the LAGEOS-1 design, was built by the Italian Space Agency (ASI) and was launched in 1992.

Both of these satellites are very dense (high mass-to-area ratio). LAGEOS-1 and 2 provide a permanent reference point in a very stable orbit for such precision earth-dynamics measurements as crustal motions, regional strains, fault motions, polar motion and earth-rotation variations, solid earth tides, and other kinematic and dynamic parameters associated with earthquake assessment and alleviation.

In addition, positions of points on the earth can be determined by two different techniques due to the extremely high accuracy LAGEOS range data from SLR systems. These two techniques are geometric mode (multilateration) and orbital dynamic mode determination.

The high mass-to-area ratio and the precise, stable (attitude-independent) geometry of the spacecraft, together with the orbit, make these satellites the most precise position references available. As proof of this, Center for Space Research (CSR) LAGEOS precision orbit determination results consistently yields 1-2 centimeter Root Mean Square (RMS) fits over arc lengths of 3 days. In addition, LAGEOS is the primary satellite used in quality controlling data from the international satellite laser ranging network. Because LAGEOS-1, 2 are visible in all parts of the world and have an extended operational life in orbit, these satellites will serve as a fundamental standards for many decades.

The LAGEOS satellites are covered with 426 cube corner reflectors with all but four of these reflectors made with fused silica glass. The other four reflectors are made of germanium to obtain measurements in the infrared for experimental studies of reflectivity and satellite orientation.

There were plans for the launch of LAGEOS-3, which is a joint multinational program with collaboration from France, Germany, Great Britain, Italy, Spain and the United States. Data from LAGEOS-3 would be used to measure, for the first time, a quasi-stationary property of the Earth - its gravitational magnetic dipole moment as predicted by Einstein's theory of general relativity. Italy eventually funded a similar mission as LARES 2.