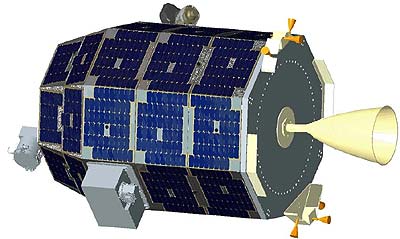 LADEE (Lunar Atmosphere and Dust Environment Explorer) will explore and characterize the moon's tenuous atmosphere. LADEE is planned for launch in 2010-2011, and will be managed by NASA's Ames Research Center with its program office at NASA's Marshall Space Flight Center (MSFC) in Alabama. LADEE is a strategic mission that will address science goals 8a and 8b from the 2007 National Research Council Study "The Scientific Context for Exploration of the Moon" to the extent that is possible within the limitations imposed by mass, cost, and duration of the proposed mission.

The objectives of the LADEE mission are:

NASA expects to place this orbiter into a low orbit (tentatively about 50 km) for at least four months (one month of check-out, and three months of data collection). The mission will be small; it is expected that the total available mass for all two or even three payload instruments will be approximately 20 kg. The available payload power is approximately 60W, but can peak to 100W depending on spacecraft orientation and thermal constraints.

The payload data rate is approximately 10 kbps with our baseline S-band communications system. Detailed trade studies of orbital elements versus payload mass and mission length are underway now. The orbiter payload is expected to include two instruments: a dust detector and a neutral mass spectrometer. However, there may be sufficient mass to include an additional atmospheric instrument. The mass devoted to science payload (instruments) is strictly limited, and will not be allowed to grow. The tight schedule (in order to reach launch in 2010-2011) and limited budget precludes extensive instrument development for this mission.

The Government is initiating several new lunar missions based on the President's Fiscal Year 2009 budget request including both orbiters and landers. These missions are lunar science missions within the overall envelope of the U.S. Space Exploration Policy. This Request for Information is directed to the first of these, a small lunar orbiter, LADEE, that will address elements of the 2007 National Research Council (NRC) Report, "Scientific Context for the Exploration of the Moon," hereafter SCEM, in particular, the lunar environment (see objectives 8a and 8b in SCEM). A small spacecraft is now under development at NASA's Ames Research Center under the direction of Dr. Butler Hine, project manager. Early estimates suggest that the spacecraft can accommodate approximately 20 kg of science instrumentation, although the precise mass of payload will depend on the launch mass available to the mission as well as on the precise lunar orbit chosen for the mission. The current spacecraft schedule requires that the science instruments be delivered to Goddard Space Flight Center for accommodation on the spacecraft by April 2010.

The total budget for the LADEE mission through phase E is $80M. Schedule and budget constraints require that NASA mission planners focus on mature instruments including flight spares from other missions, engineering models for instruments from existing flight instruments that can easily be flight qualified, or at worst "build to print" instruments. If it is determined to be advantageous to the Government, the Government could initiate acquisition of instruments as early as 2008.

Onboard, LADEE will include three science instruments and a technology demonstration:

LADEE was originally planned to be launched as a secondary payload with NASA's GRAIL mission, but was later transferred to a dedicated Minotaur-5 launch vehicle.

Minotaur-5 boosted the LADEE Spacecraft into a highly elliptical orbit of 200 km × 278,000 km around the Earth. Over the following 23 days, as LADEE orbited Earth 3.5 times, the Moon's gravitational field increased the perigee of its orbit. The spacecraft fired its on-board thrusters to alter its trajectory to allow it to enter orbit around the Moon. LADEE spent about 2.5 months reaching the Moon, getting into its science orbit, and checking out systems before its 100 day science mission started. The nominal science orbit is a near-circular retrograde (clockwise) equatorial orbit with a period of 113 minutes at about 50 km above the surface. The periselene (closest approach) is over the sunrise terminator. In January 2014, LADEE's mission was extended for about 4 weeks, as it retained enough fuel. After the science mission is complete, the orbiter impacted the lunar surface.

The LADEE NMS instrument confirmed that the moons exosphere is made up of mostly helium, argon, and neon. Their relative abundance is dependent on the time of day on the moon. The instrument conducted systematic measurements of these gases for seven months, which allowed to understand how these gases are supplied to the exosphere, and how they are ultimately lost. While most of the lunar exosphere comes from the solar wind, NMS showed that some gas comes from lunar rocks. Argon-40 results from the decay of naturally occurring radioactive potassium-40, found in the rocks of all the terrestrial planets as a leftover from their formation.