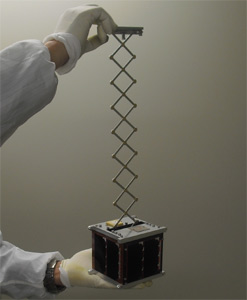 KSAT (Kagoshima Satellite, also named Hayato) is a small 1U CubeSat mission developed by the Kagoshima University, which has following objectives:

The satellite was one of a number of secondary payloads on the H-2A-202 rocket, which launched the Planet C Venus orbiter. Contact with the satellite was not established after launch.

An improved version was built as KSAT 2 (Hayato 2).