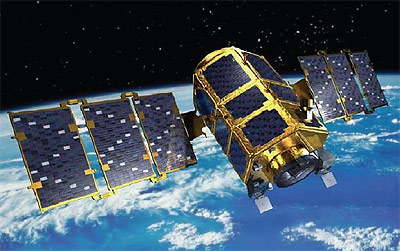 It provides high-resolution images, produced by the Multi-Spectral Camera (MSC), of the Korean peninsula for the production of maps and digital elevation models, applications for which include land use planning and disaster and risk management.

The MSC, a joint development of KARI with ELOP (Electro Optics Industries Ltd. of Rehovot, Israel) and OHB-System, Bremen, Germany, collects high-resolution panchromatic and multispectral imagery of the Earth's surface with a ground resolution of 1 m.

Astrium has been selected by KARI to support the platform development and manufacture of KOMPSAT-2. Launch was planned for 2004 on a Rokot-KM booster, but due to delays of the launch vehicle, it was launched on 28 July 2006 into a sunsynchronous orbit identical to that of KOMPSAT-1 but with a different phase (180º apart).

The satellite is still operating, but in October 2015 it was decided not to extend the KOMPSAT-2 mission any further for systematic observation services, but instead use it for research purposes until the end of its life cycle.