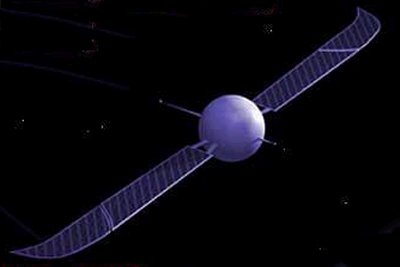 The KEO satellite, a space time capsule, will be launched in 2006 carrying messages from the citizens of Earth future generations living 50,000 years from now, when the satellite will reenter. The project is sponsored by UNESCO and the European Space Agency among other institutions. KEO was named after the most frequently used sounds in all languanges - k, e and o.

The messages and other contents will be encoded in radiation-resistant DVDs. Symbolic instructions in several formats will show how to build a DVD reader, which might no longer exist 50,000 years from now.

The satellite itself is a titanium hollow sphere 80 cm. in diameter engraved with a map of Earth and surrounded by several layers of other materials that make the sphere resistant to cosmic radiation, atmosphere reentry, space junk impacts and so on. As the satellite enters the atmosphere, one of these layers will produce an artificial aurora borealis. The satellite will not carry any communications or propulsion systems, but features two wings to increase visibility for ground observations.

It was to be launched piggy-back on an Ariane-5 rocket into an orbit 1,800 km high in late 2006, pending a mission to a compatible orbit.

Everyone can contribute message addressed to future beings - deadline is December 31, 2004. The satellite has enough capacity to carry a 4-page message from each of the 6 billion inhabitants of the planet. Once the satellite is launched, the messages with personal names removed will be made freely available on the web.

KEO will also carry a drop of blood and samples of air, sea water and earth. The DNA human genome will be engraved on one of the faces. The satellite will also carry an astronomical clock that shows current rotation rates of several pulsars; photographs of people of all cultures; and a "Contemporary library of Alexandria", an encyclopedic compendium of current human knowledge.

The KEO project was conceived in 1994 by French artist-scientist Jean-Marc Philippe, a pioneer of space art.

The status of the project is unclear, although a planned launch in 2017 is claimed.