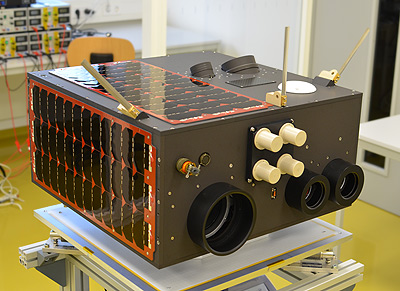 Kent Ridge 1 (KR 1) is a hyperspectral imaging microsatellite developed at the National University of Singapore in collaboration with Berlin Space Technologies (BST).

Advances in Singapore based R&D in the field of Fourier transform recovery (FTR) enable micro satellites to carry hyper spectral payloads that work simultaneously in the VNIR (400-900 nm) and SWIR (900-1700 nm) bands, enabling multitudes of new applications in the monitoring of land, water and vegetation and thus will be useful to contribute towards the effort to prevent and manage such disasters in this region.

The 80 kg Kent Ridge 1 is based on Berlin Space Technologies' LEOS-50 platform with upgrades to fit the specific needs of this mission such high internal data rate (2.2 Gbit/s) and high speed data transmitter (100Mbit/s). The satellite is powered by body mounted solar cells.

Kent Ridge 1 was launched on 16 December 2015 as a secondary payload on an Indian PSLV-CA launch vehicle and will be flying in a near equatorial orbit of 550 km altitude with around 15° inclination. This orbit has the added benefit of fast repeat cycles over the area a desired feature in disaster mitigation.

A second, identical satellite, Kent Ridge 1B, which is under assembly in Singapore, will be launched at the end of 2018 or the beginning of 2019.