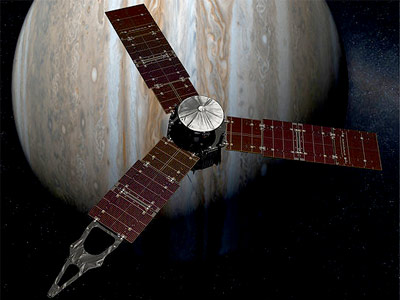 NASA has announced the second mission in its New Frontiers Program: a mission – called Juno (Jupiter Near-polar Orbiter) to fly to Jupiter – that now will proceed to a preliminary design phase. At the end of the preliminary design study, the mission must pass a confirmation review that will address schedule, technical and cost risks before being confirmed for the development phase.

Juno will be the first solar-powered mission to Jupiter. Its seven science instruments are designed to unlock secrets of solar system formation.

The mission will conduct a first-time, in-depth study of the giant planet. This mission proposes to place a spacecraft in a polar orbit around Jupiter

A nominal mission will place the Juno spacecraft in a polar orbit around the giant planet for one year. As it orbits from pole to pole on a unique path designed to avoid most of Jupiter's harsh radiation, Jupiter will rotate beneath, allowing the science instruments to produce full-planet maps of gravity, magnetic fields and atmospheric water content as well as studying Jupiter's auroral particles and fields.

For weight savings and redundancy, Juno uses a dual-mode propulsion subsystem, with a bi-propellant main engine and mono-propellant reaction control system thrusters. The Leros-1b main engine is a 645-Newton bi-propellant thruster using hydrazinenitrogen tetroxide. Its engine bell is enclosed in a micrometeoroid shield that opens for engine burns. The engine is fixed to the spacecraft body firing aft and is used for major maneuvers and flushing burns. The 12 reaction control system thrusters are mounted on four rocket engine modules. They allow translation and rotation about three axes. They are also used for most trajectory correction maneuvers.

To protect sensitive spacecraft electronics, Juno will carry the first-of-its-kind radiation shielded electronics vault, a critical feature for enabling sustained exploration in such a heavy radiation environment. Each of the titanium cubes eight sides measures nearly a square meter (nearly 9 square feet) in area, about a third of an inch (1 centimeter) in thickness, and 4 pounds (18 kilograms) in mass. This titanium box  about the size of an SUVs trunk  encloses Junos command and data handling box (the spacecrafts brain), power and data distribution unit (its heart) and about 20 other electronic assemblies. The whole vault weighs about 500 pounds (200 kilograms).

Junos Electrical Power Subsystem manages the spacecraft power bus and distribution of power to payloads, propulsion, heaters and avionics. The power distribution and drive unit monitors and manages the spacecraft power bus, manages the available solar array power to meet the spacecraft load and battery state of charge, and provides controlled power distribution. Power generation is provided by three solar arrays consisting of 11 solar panels and one MAG boom. Two 55 amp-hour lithium-ion batteries provide power when Juno is off-sun or in eclipse, and are tolerant of the Jupiter radiation environment. The power modes during science orbits are sized for either data collection during an orbit emphasizing microwave radiometry or gravity science.

Junos thermal control subsystem uses a passive design with heaters and louvers. The main component of the thermal control subsystem consists of an insulated, louvered electronics vault atop an insulated, heated propulsion module. This design accommodates all mission thermal environments from Earth orbit to Jupiter orbital operations. During cruise, while the spacecraft is close to the sun, the high-gain antenna is used as a heat shield to protect the vault avionics. Most instrument electronics are contained within the radiation vault and are thermally managed as part of the vault thermal control system. Science sensors are externally mounted to the deck and are individually blanketed and heated to maintain individual temperature limits.

The selected New Frontiers science mission must be ready for launch within a mission cost cap of $700 million. Launch on an Atlas-5(551)¹ took place in August 2011.

Juno performed a large Orbit Insertion Maneuver on 4 July 2016 to place it in a 107-day Capture Orbit. The orbit was later lowered to a 53 day orbit. Further lowering to a 14 day orbit was postponed due to caution regarding a stuck Helium valve in the propulsion system.

Juno's mission has in June 2018 officially been extended to 2022, with the primary mission of the spacecraft being extended from this July until July 2021.