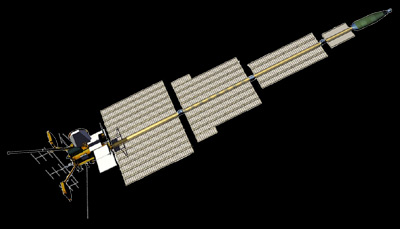 NASA is developing plans for an ambitious mission to orbit three planet-sized moons of Jupiter - Callisto, Ganymede and Europa -- which may harbor vast oceans beneath their icy surfaces. The mission, called the JIMO (Jupiter Icy Moons Orbiter), would orbit each of these moons for extensive investigations of their makeup, their history and their potential for sustaining life.

As the mission is currently proposed, a heavy lift launch vehicle would lift the spacecraft into high Earth orbit. The ion-propulsion thrusters would spiral the spacecraft away from Earth and then on its trip to Jupiter.

After entering orbit around Jupiter, the spacecraft would orbit Callisto, then Ganymede, and finally Europa. The intensity of the radiation belts at Europa limits how long a spacecraft's electronics are able to operate in orbit around Europa, even with advances in radiation-resistant electronics that would be used on this mission.

All three moons would be studied with the same complement of instruments and make uniform measurements. Special attention would be paid to identifying high-potential future landing sites.

NASA would choose the final suite of instruments through a competitive process open to proposals from scientists worldwide. Two highly probable instruments are:

Others instruments likely to be included are:

In 2003, NASA's Project Prometheus was established to develop technology and conduct advanced studies in the areas of radioisotope power system and nuclear power and propulsion for the peaceful exploration of the solar system. Project Prometheus, organized within NASA's Office of Space Science, has the goal of developing the first reactor powered spacecraft capability and demonstrating that it can be operated safely and reliably in deep space on long duration missions. The proposed Jupiter Icy Moons Orbiter has been indentified as the first space science mission to potentially incorporate this new revolutionary capability.

Because the proposed Jupiter Icy Moons Orbiter requires the development and testing of many new technologies, the mission would not launch until 2011 or later. In 2005, the mission was judged too complicated and postponed to 2017, after a less ambitious Prometeus mission has proven the concept.

Northrop Grumman Corp. has been selected in September 2004 to partner with NASA's Jet Propulsion Laboratory to develop a preliminary design for the Prometheus Jupiter Icy Moons Orbiter (JIMO). The contract award is for approximately $400 million, covering work through mid-2008.