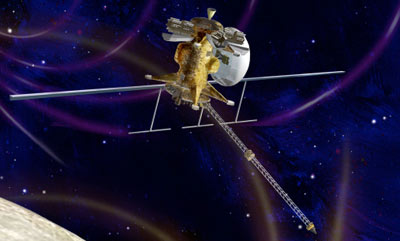 JEO (Jupiter Europa Orbiter) is the NASA element of the joint NASA/ESA EJSM (Europa Jupiter System Mission). It is designed to follow-up on the major discoveries of the Galileo and Voyager missions at Europa, especially its ocean. JEO would be built to withstand the intense radiation in Europa orbit, and would consist of an orbiter with 11 science instruments designed for extensive mapping of Europa. On the way to Europa, JEO would tour the Jovian system and make routine and frequent observations of Jupiter, its satellites and its environment. The sister mission provided by ESA is JGO.

Within the context of the EJSM themes and objectives, JEO would focus on its sub-goal: Explore Europa to investigate its habitability. While the primary focus of JEO is to orbit Europa, the science return encompasses the entire Jovian system, especially as is relevant to Europas potential habitability. JEO uniquely includes flybys of Io and Europa, and includes flybys of Ganymede and Callisto, along with ~ 2.5 years observing Jupiters atmosphere, magnetosphere, and rings. The NASA-ESA Joint Jupiter Science Definition Team (JJSDT) developed the science objectives, measurements, model payload, and science value assessments for the JEO element of the EJSM. The model payload was used to assess the feasibility of the science objectives and allow for system cost estimates. The actual payload would be selected via a competitive Announcement of Opportunity (AO) from NASA expected in 2011.

JEO would launch in February 2020 on an Atlas-5(551)¹ and, using a ballistic trajectory with Venus-Earth-Earth gravity assists (VEEGA), arriving at Jupiter in December 2025. Jupiter Orbit Insertion (JOI) begins a 30 month Jovian system tour followed by a 9 month science mapping phase after Europa Orbit Insertion (EOI) in July 2028. The orbiter would ultimately impact the surface of Europa after succumbing to radiation damage or running out of orbit maintenance fuel. Highlights of the Jovian tour and Europa mapping phase include:

The JEO flight system is comparable in size and complexity to other spacecraft for similar missions such as Cassini or MRO. The concept would feature full redundancy for engineering functions, 3-axis stabilized pointing, a radio-isotope power source (RPS) with batteries for peak power management, bi-propellant chemical propulsion, a large gimbaled high gain antenna (HGA), and X-band and Ka-band transponders for tracking, telemetry and precision Doppler measurements. Radiation hardened electronics would be used throughout with shielding used to further reduce radiation levels for electronic components and assemblies. Remote sensing instruments are mounted and aligned to accommodate continuous nadir pointing in the Europa science orbit.

The model payload is:

The JEO mission was cancelled.