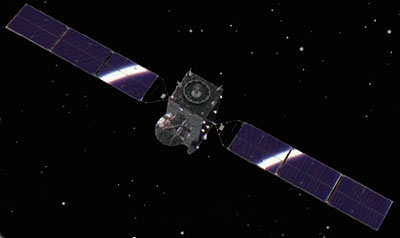 JDRS 1 is a Japanese data relay satellite with a dual military and civil mission.

The satellite was built by Mitsubishi Electric (MELCO), probably using their DS-2000 bus.

The military payload is an optical data relay payload to connect with the latest generation IGS-Optical and IGS-Radar reconnaissance satellites.

JAXA's radio communication payload is DRTS, which is a direct replacement to Kodama.

JAXAs optical communication payload is called LUCAS (Laser Utilising Communication System), which uses an infrared beam to transmit data between spacecraft at rates of up to 1.8 Gbps. It consists of two Laser terminals:

Data is downlinked via a Ka-band connection to the ground station.