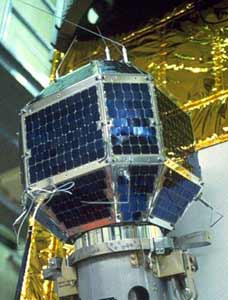 The JAS satellites were developed and built by the Japan Amateur Radio League. The 26-sided polyhedral satellites weighted 50 kg and were powered by body mounted solar cells, which supplied 10 W. The satellite were 0.44 m in diameter, and 0.47 m long. A turnstile antenna ring at its base received signals and four transmitting antennas extended from the top.

JAS-1a or Fuji 1a was launched by the maiden two-stage H-1 (9 SO) launch vehicle from the Tanegashima Space Center of the National Space Development Agency of Japan. Its mission was to provide analog and digital international satellite communications for radio amateurs, to study satellite tracking and control techniques, and to confirm the on orbit functions of the on board transponder developed by the amateur radio transpose group. It was renamed Fuji-OSCAR 12 in orbit.

JAS-1b or Fuji 1b was launched by a 2-stage H-1 (9 SO) rocket that launched MOS-1b. It succeeded JAS 1 (Oscar 12), Japan's first communications satellite linking amateur radio operators. JAS-1B operated as a store and forward message service. Uplink frequency was 144 MHz; downlink was 435 MHz. It was renamed Fuji-OSCAR 20 in orbit.

JAS 2 or Fuji 2 was launched by an H-2 rocket, which also put ADEOS 1 into orbit. It was renamed Fuji-OSCAR 29 in orbit.