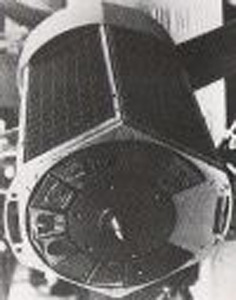 The Iskra satellites were a series of soviet amateur communications satellites built by students and radio amateurs at the Ordzhonikidze Aviation Institute.

The hexagonal 28 kg satellites were powered by solar cells. Each was equipped with a transponder, a telemetry beacon, a ground-command radio, a codestore message bulletin board, and a computer with memory. The satellite transponders received at 21 MHz and transmitted at 28 MHz. Their telemetry beacons were near 29 MHz.

Iskra 2 was launched inside the Salyut 7 space station. On 17 May 1982, the cosmonauts unwrapped the satellite and pushed it out an airlock at an altitude of 210 miles. Moscow TV showed live coverage of that "hand launch" allowing the Ordzhonikidze Aviation Institute students to see their satellite go into its own orbit. Due to the low orbit, the satellite was able to remain in space only about seven weeks before burning in the atmosphere on 9 July 1982.

Iskra 3, mainly identical to its predecessor, was transported by Progress 16 to the Saylut 7 space station, where it was later also deployed via the airlock. Iskra 3 suffered from internal overheating and didn't work as well. The satellite remained in space only four weeks before descending into the atmosphere and burning up on 16 December 1982.