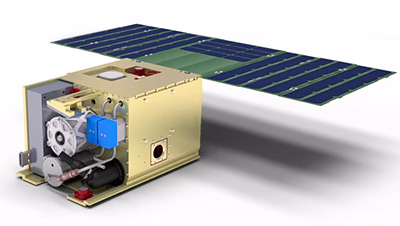 iSat (Iodine Satellite) spacecraft will be the first CubeSat to demonstrate high change in velocity from a primary propulsion system by using Hall thruster technology and iodine as a propellant. The mission will demonstrate CubeSat maneuverability, including plane change, altitude change and change in its closest approach to Earth to ensure atmospheric reentry in less than 90 days.

To enable the success of the propulsion subsystem, iSat will also demonstrate power management and thermal control capabilities well beyond the current state-of-the-art for spacecraft of its size. This technology is a viable primary propulsion system that can be used on small satellites ranging from about 10 kilograms to more than 450 kilograms. iSats fuel efficiency is ten times greater and its propulsion per volume is 100 times greater than current cold-gas systems and three times better than the same system operating on xenon.

iSats iodine propulsion system consists of a 200 watt (W) Hall thruster, a cathode, a tank to store solid iodine, a power processing unit (PPU) and the feed system to supply the iodine. This propulsion system is based on a 200 W Hall thruster developed by Busek Co. Inc., which was previously flown using xenon as the propellant. Several improvements have been made to the original system to include a compact PPU, (BHT-200-I) targeting greater than 80 percent reduction in mass and volume of conventional PPU designs. The cathode technology is planned to enable heaterless cathode conditioning, significantly increasing total system efficiency. The feed system has been designed to include iodine compatible control valves with internal heaters and temperature sensors to coincide with the iodine-compatible thruster.

A key advantage to using iodine as a propellant is that it may be stored in the tank as an unpressurized solid on the ground and before flight operations. During operations, the tank is heated to vaporize the propellant. Iodine vapor is then routed through custom flow control valves to control mass flow to the thruster and cathode assembly. The thruster then ionizes the vapor and accelerates it via magnetic and electrostatic fields, resulting in high specific impulse, characteristic of a highly efficient propulsion system.

After the CubeSat has successfully detached from its launch vehicle, it will deploy its solar panels, correct for tip-off and maintain attitude control before ground contact. An initial check-out period of two weeks is planned for testing all subsystems. The spacecraft will charge the power system while in sunlight, using momentum wheels and magnetic torque rods to rotate the vehicle to the required attitude. The thruster will be operated to perform maneuvers when appropriate. After checkout, the spacecraft will transition to a more automated mode, initiating preprogrammed sequences. The spacecraft will use propulsion to lower its altitude from its initial orbit of about 600 kilometers to a circular orbit of about 300 kilometers. Once in its new orbit the CubeSat will perform a plane change maneuver, complete any final operational maneuvers and continue to lower its closest approach to Earth until achieving a less than 90-day deorbit.

Propulsion technology is often a critical enabling technology for space missions. NASA is investing in technologies to provide high value missions with very small and low cost spacecraft, including CubeSats. CubeSats, however, currently lack any appreciable propulsion capability. They are typically deployed and tumble or drift without any ability to transfer to higher or lower orbits, perform orbital maintenance or perform de-orbit maneuvers. The iodine thruster allows iSat to alter its orbital inclination and elevation, opening up a wider range of mission objectives than previously possible with spacecraft of this size.

The iSat mission is funded through NASAs Small Spacecraft Technology Program (SSTP), which is chartered to develop and mature technologies to enhance and expand the capabilities of small spacecraft with a particular focus on communications, propulsion, pointing, power, and autonomous operations. SSTP is one of nine programs within STMD.

The mission was planned for launch in fall 2017, then later moved to mid 2018, until in May 2017 the project has temporarily stiood down to allow for the propulsion system to mature.