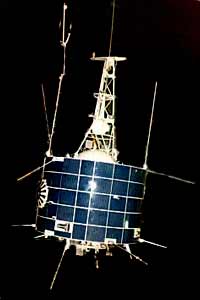 The Ionosfernaya Stantsiya satellites were ionospheric topside sounder involving the downward vertical pulse probing of the ionosphere. A variety of instruments were used and the result stored on board for subsequent readout while in radio visibility of measuring centers on earth:

The payload was controlled by some unspecified means to prevent disorderly spinning of the satellite. Other sensors determined its precise position in orbit and angular position in relation to the sun and the earth's magnetic field.

One satellite was lost in a launch failure, while the second one reached orbit on 2. December 19170, named Kosmos 381. It operated until mid January 1971.