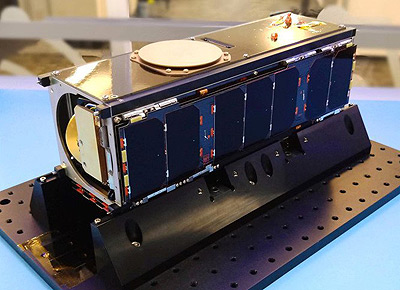 Assembled in under six months, Clyde Space has provided the satellite platform, payload integration, and testing of the IOD-1 GEMS spacecraft. The flight-proven Clyde Space platform utilizes the company's next generation power subsystems, high-speed s-band transmitter and high-performance onboard computer that support the customer's payload requirements.

OMS plans to deploy a constellation of small satellites post IOD-1 GEMS success as part of its Global Environmental Monitoring Satellite (GEMS) program which would provide temperature, humidity and precipitation readings at different levels throughout the atmosphere, with a 15-minute refresh rate for any global position. OMS anticipate delivering weather data to insurance, aerospace, maritime, energy and agriculture markets. Through this data, businesses that rely on accurate and timely weather information would be able to substantially improve operational efficiencies.

The Satellite Applications Catapult, which was set up by the government to foster New Space enterprises, is providing six satellites on which companies can prove their technologies work on orbit. Five of these satellites will be manufactured by Clyde Space.

The satellite is planned to be launched onboard a the Cygnus CRS-11 uncrewed resupply spacecraft to the ISS in 2019, from where it will be deployed.